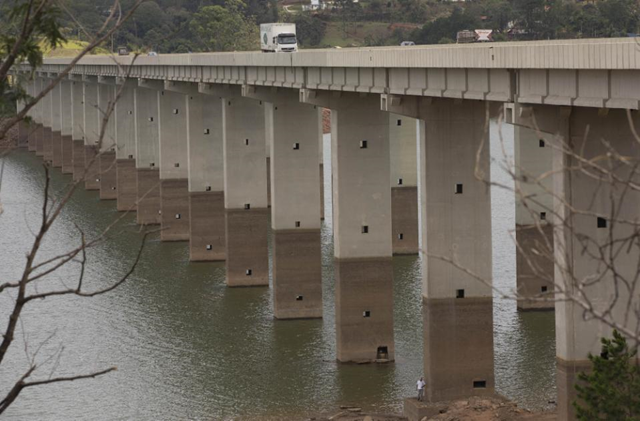 By Stan Lehman 2 April 2015
SÃO PAULO (Associated Press) – Brazil's biggest city has recorded its rainiest March since 2008, but the worst drought in more than 80 years has left reservoir levels critically low and water experts fear that strict water rationing may still loom for São Paulo as it enters the April-September dry season.
The crucial Cantareira water system, which provides water to about 6 million of the 20 million in the metropolitan area, was still only about one-fifth full as the dry season began.
Authorities already have imposed water-saving measures, including cut rates for people who limit usage, reduced pressure in water lines during off-peak hours and de facto rationing: some areas receive water only half the day.
Environment Minister Izabella Teixeira said this week that those programs must be expanded, and the government is preparing "a rational water-use program, given the end of the rainy season." She offered no details.
But some think that may not be enough.
Mario Thadeu Leme de Barros, head of the University of São Paulo's hydraulic engineering and environmental department, said existing measures, combined with the transfer of water among reservoirs, "will hopefully allow us to reach the end of the year with the mini-rationing that exists."
He also called for the use of more efficient appliances, the use of wastewater and better detection of leaks in a system that loses more than 30 percent of its water to leaks.
"But we cannot discard the possibility of more harsh water rationing measures should we be hit with an even worse drought during the coming dry season," he said.
Moody's Investors Service warned last month that water rationing looks increasingly likely, adding, "Overall, mandatory federal or state water rationing would worsen Brazil's already sluggish economic growth."
In March, São Paulo, received 8.13 inches (206.5 millimeters) of rain, 16 percent above the average, boosting the level of the Cantareira system from 5 percent to nearly 19 percent of its capacity, the water utility Sabesp said Thursday on its website.
The other five systems were at 23 percent to 97 percent of capacity as the dry season started.

Time For A New Rain Dance