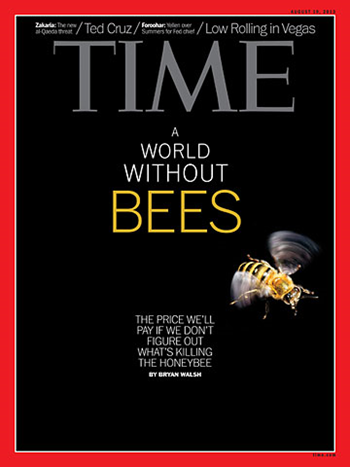 A few weeks back we highlighted a graph illustrating the decline of wildlife and bugs in the UK, since 1968 - it was our economic graph of the week. Wherein the term "Bugonomics" was also coined for posterity. Our point then and still is - Economists place too much emphasis on the abstract measures of wealth, such as GDP and CPI, and not enough on the key metrics associated with the real physical wealth of the planet. Blame them all, right back to Adam Smith.

Compare this to your doctor's assessment based on how well you are dressed during appointments - not on any other diagnostic measures that probe into the physical state of your body. It would be a small consolation being well-dressed for your premature funeral. See the point? That's why we believe the field of "Bugonomics" is destined to replace Keynesian and other neo-classical theories. It is clearly more scientific.

So we applaud TIME magazine's article on "Honey Bees" for bringing forward this salient economic issue. For it drives home the idea that without these bees our way of life and existence may be in jeopardy. And that's just one bug! Unfortunately, we can only link you to the beginning of the article, but it should be enough to get the point across.

In summary, we emphasize that bugs can go on when our economies don't; but our economies would cease if bugs should ever perish. In fact, we speculate matters will be much worse for us if they do. By the way, all along the economy would be growing at a robust pace, and we should all look pretty good too!

So when will Harvard, MIT, Oxford or Princeton ask, "Why don't we have someone teach a "Bugonomics" course this semester, instead of that old school theory?" Hopefully, for our collective sake, they are searching for applicants at this very moment.

P.S. It should not take a rocket scientist to figure out that certain "non-financial measures" are better determiners of macro-economic wealth - however, it remains unthinkable that economics should be cluttered by the blathering of scientific protocols. So far.

Flowers? I can't even fly Doc!