"What! Now they even started a committee?"

Do you ever have that sneaky suspicion with all the news about climate change, biosphere collapse, financial instability, political strife and war, overpopulation and social upheaval that the world is soon coming to an end? Who ever really thought it could go on forever anyhow? So if you do have those sinking feelings, your thoughts are in line with Stephen Hawking and other "Big Brains" who are getting together to formulate plans for the end of the world.

This article (linked above) from The Independent lists the members of this elite committee along with its agenda of  possible end-game scenarios. Two things are obvious to our "Little Brains" firstly, is the people who are missing on this committee, and secondly, the short list of scenarios. We could add at least ten more possible end-games stories. And more likely ones too. .

That in itself speaks volumes - but we hope these guys are smart enough to realize that once they design their end of the world plan - don't forget to pass it around to the rest of us.

Gotta hand to our great leaders - but never forget they are the same one's that got us here!

P.S. By the way, had the opportunity to discuss this topic with a poet friend. And we both agreed that the problem with this exercise is that they are concerned about singular events and not processes i.e. sequential serial events. In other words,why should time be relevant to the expected outcome being studied? Anyway he observed,  "because that was the road less travelled, and that would make all the difference!"

Ahhh Poets... What do they know?

What if there are aliens? And they're here already? 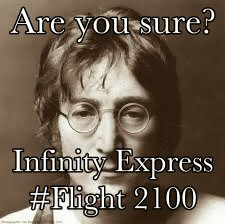