In Norfolk, evidence of climate change is in the streets at high tide 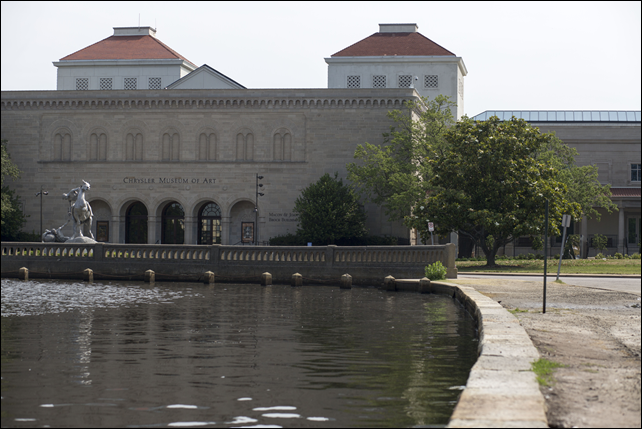 (Washington Post) – At high tide on the small inlet next to Norfolk’s most prestigious art museum, the water lapped at the very top of the concrete sea wall that has held it back for 100 years.

It seeped up through storm drains, puddled on the promenade and spread, half a foot deep, across the street, where a sign read, “Road Closed.”   The sun was shining, but all around the inlet people were bracing for more serious flooding. The Chrysler Museum of Art had just completed a $24 million renovation that emptied the basement, now accessible only by ladder, and lifted the heating and air-conditioning systems to the top floor. A local accounting firm stood behind a homemade barricade of stanchions and detachable flaps rigged to keep the water out. And the congregation of the Unitarian Church of Norfolk was looking to evacuate.

“We don’t like being the poster child for climate change,” said the Rev. Jennifer Slade, who added that the building, with its carved-wood sanctuary and soaring flood-insurance rates, would soon be on the market for the first time in four decades. “I don’t know many churches that have to put the tide chart on their Web site” so people know whether they can get to church.


On May 6, the Obama administration released the third National Climate Assessment, and President Obama proclaimed climate change no longer a theory; its effects, he said, are already here. This came as no surprise in Norfolk, where normal tides have risen 11 / 2 feet over the past century and the sea is rising faster than anywhere else on the East Coast.

And when the storms come - look out!


Perhaps this futuristic picture of Norfolk is a little dramatic, but then again maybe not. One thing is for certain though no one wants to be a "poster child" for climate change. Particularly when the storms unleash their furies.
Dr Peter G Kinesa
June 2, 2014