The Marc Faber Blog : Childish Remarks -The Asset Purchase programme of the Fed has been a complete Disaster

In fact, it will be difficult to measure how effective Fed policy has been or will be as history has yet to unfold. Had Uncle Ben not implemented this program, then interest rates no doubt would be much higher than they are today. There are a lot of very nervous long-bond holders who were obviously more than happy to pass their holdings back to the Fed. Everyone is living in fear of a sharp spike in the long rates that would absolutely clobber the principal market value of these bonds.

But QE is not just about keeping rates low, it is also a crafty way to hold asset values in place, including the equity market. This may actually be its main purpose. The last thing the Fed and Obama needs is to have huge bond losses realized and recorded by banks, portfolios, and other financial intermediaries.

Such losses would vacuum up all the liquidity in the repo, bond and money markets faster than Lehman's 2008 debacle, as well as knocking the proverbial crap out of their respective equity boxes. Think about it - this prevention is moping up about 40 billion (possibly more) monthly in marked-to-market accounting losses that would be caused by sharp rate  increases.

Like the Fed we are holding back a few cards here, but in all likelihood, there is more to the Fed's QE policy actions than meets the eye - and Marc should be a little more careful with his remarks - they come across as premature and childish!

And that's being kind. 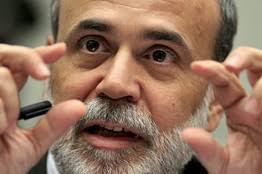