"anybody going on this year's march?" 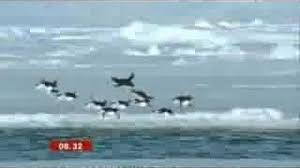 It is 6:22 am Sunday morning. The air lingers cool and crisp yet breathes  into my mind the start of the new day. No work. Peace and serenity . Just a day for those personal dillies and dallies - that relax the soul looking to stir new dreams for the road ahead. My coffee chirps with its own lost dreams  - and where have the Penguins gone?  What else is there to know?

Suddenly, the ringing phone disturbs the symphony of penguins musing  my mind.

How could he be calling now? We have been grinding all week? What is so important?

“Peter” he moans in his soft sincere voice. Now I know  this is his set up for a pitch.


"Last night the media guys finally polished off the Group Video. I think we should go all out and release it on Monday"


"Listen Peter;" he interupts, "We build into this as a long-term touchstone for everyone. A sort of historical moment."


So we banter back and forth for another ten or so minutes - it actually seemed much longer. In the end all I can say is we're back - and Macky is definitely back in town. And maybe that's why it is so much fun working here.

But then again there's the Penguins,- and what else is there to know?

Our media team had at last revitalized our Group's corporate video on the weekend. Once they did, we had everyone on staff scrambling to put something together for release Monday. Like troopers they pulled it together, despite the fact this was supposed to their first weekend off since the holidays. To them, we owe a great debt of gratitude.

Our message is pretty clear; "Bad Guys Beware" cause ole Macky's back in town. And our unconventional maverick approach will expose and pursue with a vengeance those who work against the better interests of the human condition, particularly in areas concerning economics, investments and finance. At the same time, giving you the top world leading insights in these areas. We will take no prisoners!

We had the media guys also dig up the lyrics; we posted them below so you could sing along as you watch. One of those team spirit deals - that brings a tear to the heart.

Anyway, without further blathering. " Oh the shark babe, has such teeth, dear..."

Oh, the shark, babe, has such teeth, dear

And it shows them pearly white

And he keeps it, out of sight

Ya know when that shark bites with his teeth, babe

So there's never, never a trace of red

And someone's sneakin'round the corner

Could that someone be Mack the Knife?


There's a tugboat, huh, huh, huh down by the river don'tcha know

WITH a cement bag just droopin' on down

Oh, that cement is just, it's there for the weight, dear

After drawin' out all his hard-earned cash


And now MacHeath spends just like a sailor
Could it be our boy's done somethin' rash?

Oh, the line forms on the right, babe

Now that Macky's back in town

Yes, that line forms on the right, babe