Marc Faber : Ben Bernanke can drop as many Dollar bills as he likes

Marc Faber : Ben Bernanke can drop as many Dollar bills as he likes

The creation of fiat currency has reached a tipping point, particularly for countries in the Euro zone. Why? First, it should be self-evident that even with low rates, there has been no uplift in capital formation or new business activity. One would expect that even established firms would be escalating there capital expenditures. They are not! Why? There are few sensible opportunities and the general economy is stuck in a liquidity- valuation trap. Why? Well, for one Greece, Spain, Italy and the others have fewer resources to exploit while consumers remain handcuffed at the pocket book.

So Uncle Ben might as well be back creating converted rice, as it will have about the same effect on this Ice Age for global markets, business and economies. 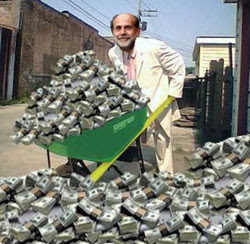