Scientists think they can now better explain the recent surge in methane levels seen in the Earth's atmosphere. 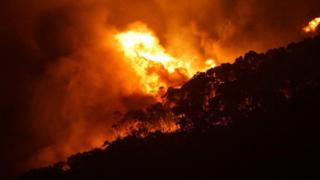 Over the past few years, natural gas has become the primary fuel that America uses to generate electricity, displacing the long-time king of fossil fuels, coal. In 2019, more than a third of America's electrical supply will come from natural gas, with coal falling to a second-ranked 28 percent, the Energy Information Administration predicted this month, marking the growing ascendency of gas in the American power market.

But new peer-reviewed research adds to the growing evidence that the shift from coal to gas isn't necessarily good news for the climate.

A team led by scientists at NASA's Jet Propulsion Laboratory confirmed that the oil and gas industry is responsible for the largest share of the world's rising methane emissions—which are a major factor in climate change—and in the process the researchers resolved one of the mysteries that has plagued climate scientists over the past several years. That mystery? Since 2006, methane emissions have been rising by about 25 teragrams (a unit of weight so large that NASA notes you'd need more than 200,000 elephants to equal one teragram) every year. But when different researchers sought to pinpoint the sources of that methane, they ran into a problem.