A major new analysis on the impact melting polar ice sheets could have on sea level rise has given rise to some worrisome conclusions.
Researchers found that sea levels increased some 20 feet during three warming periods of 1.8 to 3.6°F (1 to 2°C) that took place at different interglacial periods over the past three million years. The study’s findings mean that the planet could be in for major sea level rise even if warming is kept to 2°C — a limit that the world is set to exceed without major action on climate change.

‘The age of carbon is over’ and a transition to a greener economy is inevitable, says Hans Joachim Schellnhuber, adviser to the German government and Pope Francis

An “induced implosion” of the fossil fuel industry must take place for there to be any chance of avoiding dangerous global warming, according to one of the world’s most influential climate scientists.
Professor Hans Joachim Schellnhuber, an adviser to the German government and Pope Francis, said on Friday: “In the end it is a moral decision. Do you want to be part of the generation that screwed up the planet for the next 1,000 years? I don’t think we should make that decision.” 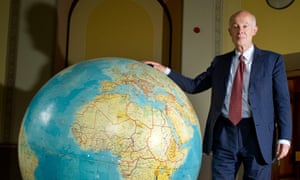 Schellnhuber was speaking at a major science conference in Paris, taking place before a crunch UN summit in December, also in the city, at which nations must seal a deal on global warming. World leaders were sent a stark message in the communique issued by the conference, which warned that the opportunity to avoid disaster is rapidly diminishing.

The World’s Greenhouse Gas Emissions in One Graphic

Carbon emissions are often considered in the future tense: the G7 aims to reduce future emissions and countries attending the Paris climate summit in December will pledge to make future carbon cuts. Amid all the future talk, the World Resources Institute (WRI) has released new information about the present — an infographic and huge databaseof the world’s current greenhouse gas emissions.

Alaska Starts Cleaning Up Debris From Japan Spread by 2011 Tsunami
Alaska has more coastline than any other state. And its cleanup operations often are expensive and dangerous, said Nikolai Maximenko, a senior researcher at the Hawaii-based International Pacific Research Center.
“Even without the tsunami, Alaska is well known for being polluted with all these buoys and other stuff from fisheries activity and from other human activities,” he said.

Water is a precious commodity, but B.C. is just

One doesn’t have to stare too long at this picture to conclude there is something dreadfully wrong. Tens of thousands have come to the same conclusion, signing an online petition that has now reached 160,000. Campaign director Liz McDowell says she will present it to Environment Minister Mary Polak once it has reached 200,000 – which, given the growing public anger over this matter, shouldn’t be much longer.

Nevertheless, as the EIA affirms peak production in the second quarter of 2015, the fall in output over the next few quarters should bring supply and demand back into balance, or at least close to it. Supply exceeded demand by more than 2.5 mb/d in the second quarter of this year, but that gap will narrow to 1.6 mb/d in the third quarter and just 500,000 barrels per day in 2016

China, Greece and the NYSE: Black Swans or Red Flags?

Chad police: Anyone wearing face veils will be arrested