The Daily Bell - Central Banking and 'The Edgy Optimist'

The Daily Bell - Central Banking and 'The Edgy Optimist'

Since the days of Adam Smith, it has been recognized that money is an imaginitive invention. Indeed, Smith himself was less concerned about the medium, rather focusing more on the reasons and logic behind the physical flow of production and consumption; however, failing to realize that both were ultimately constrained because the planet's inputs would ultimately cease existing. Remaining for all time as his one critical faulty assumption that would project our human experiment on a disasterous course.

Today, Central Bankers recklessly create infinite amounts of currency that have inherent obligations to deliver future value - they may be optimists, criminals or utterly insane believing and upholding this money-creating process that possesses no relationship with delivering object goods and services. How can they perpetually create money, when the originating source of value will ultimately be depleted? The answer lends much weight to the conclusion: "not only is this process a criminal ponzi scheme - it is absolutely insane".

And perhaps this is why Central Bankers secretly admire and study the Bernie Madoffs of our times.


MONEY Creators: Who did it? 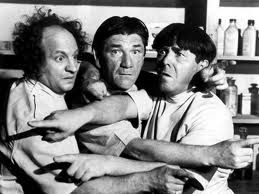