"about a fifth of the total -- had been drilled so systematically over nearly a century that more than 40 percent of their oil has been already extracted, a considerable figure for an industry that usually struggles to recover more than half the barrels in place underground."

The biggest Saudi oil field is fading faster than anyone guessed

It was a state secret and the source of a kingdom’s riches. It was so important that U.S. military planners once debated how to seize it by force. For oil traders, it was a source of endless speculation.


When Saudi Aramco on Monday published its first ever profit figures since its nationalization nearly 40 years ago, it also lifted the veil of secrecy around its mega oil fields. The company’s bond prospectus revealed that Ghawar is able to pump a maximum of 3.8 million barrels a day -- well below the more than 5 million that had become conventional wisdom in the market. 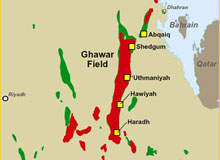 "As Saudi’s largest field, a surprisingly low production capacity figure from Ghawar is the stand-out of the report," said Virendra Chauhan, head of upstream at consultant Energy Aspects Ltd. in Singapore.

WHAT IS SAUDI ARAMCO?