"The powers to be are now presiding over the greatest calamity that has ever befell on humanity and on much of nature." 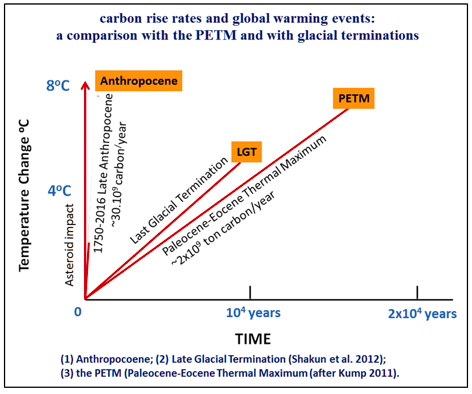 The Advent of Extreme Weather Events and Climate Tipping Points

According to Hans Joachim Schellnhuber, chief climate advisor to the European Union, “We’re simply talking about the very life support system of this planet”. As fascism and the horror of murderous hate crimes are on the rise, governments are presiding over runaway climate change leading toward mass extinctions of species, costing the lives of billions and the demise of much of nature, while children are protesting against the betrayal of their future.

Evidence based on early climates and on current global warming requires revision of the mostly-linear IPCC climate change trajectories proposed for the 21st to 23rd centuries (Figure 3). The polar ice sheets, acting as thermostats of the climate, are melting at an accelerated rate.
Polar temperatures have been rising at twice the rate of lower latitude zones, weakening the jet stream and the Arctic boundary, which are becoming increasingly undulated (Figure 4). This allows cold air masses to breach the boundary as they move southward, as happened recently in North America and Europe, while warm air masses migrate northward. As the large ice sheets are melting large pools of cold ice melt water are forming in the North Atlantic Ocean south and east of Greenland (Rahmstorf et al. 2015) (See this). The AMOC (Atlantic Meridional Ocean Circulation) is slowing down and the probability of future transient freeze event/s (stadials) lasting few decades or longer (Hansen et al. 2016) is increasing. The juxtaposition of polar-derived freezing fronts and tropics-derived warm air masses leads to a rise in extreme weather events (Figure 1). 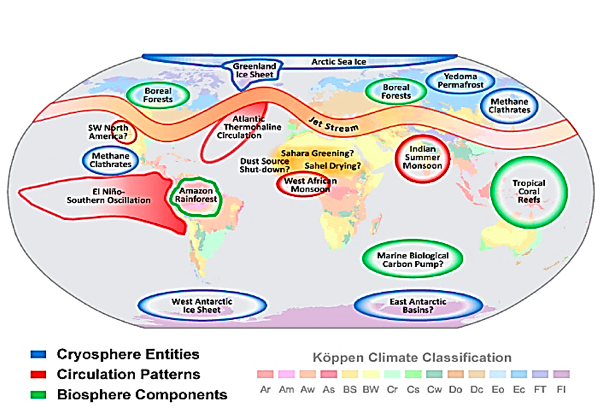 EXTREME WEATHER IN A WARMING WORLD