Will Rising #GDP Per Capita Increase Your #Happy Planet Index? How does compliance with the UN Sustainable Development Goals SDGs square with achieving development that can be sustained within the means of our planet? Ultimately, to be sustainable, development need to fit within our planet's resource budget. Therefore sustainable development can be mapped as development achievement, on the on hand, and resource demand, on the other.
The graph below summarizes the results. It shows the position of the top and bottom 10 countries on the SDG index in terms of their Human Development Index scores and their Ecological Footprints.

Soaring ocean temperature is 'greatest hidden challenge of our generation'

A ‘truly staggering’ rate of warming is changing the behaviour of marine species, reducing fishing zones and spreading disease. The ocean has absorbed more than 90% of the extra heat created by human activity. If the same amount of heat that has been buried in the upper 2km of the ocean had gone into the atmosphere, the surface of the Earth would have warmed by a devastating 36C, rather than 1C, over the past century.
https://www.theguardian.com/environment/2016/sep/05/soaring-ocean-temperature-is-greatest-hidden-challenge-of-our-generation

The oceans are heating up. That's a big problem on a blue planet

The extra heat that our greenhouse gases trap is actually absorbed by the oceans. That means that the upper few meters of the sea have been steadily warming more than a tenth of a degree celsius per decade, a figure that’s accelerating. When you think of the volume of water that represents, and then try to imagine the energy necessary to raise its temperature, you get an idea of the blowtorch that our civilization has become.
https://www.theguardian.com/commentisfree/2016/sep/07/oceans-heating-big-problem-blue-planet-iucn-report

The Fed’s Only Escape Is to Trash the Dollar 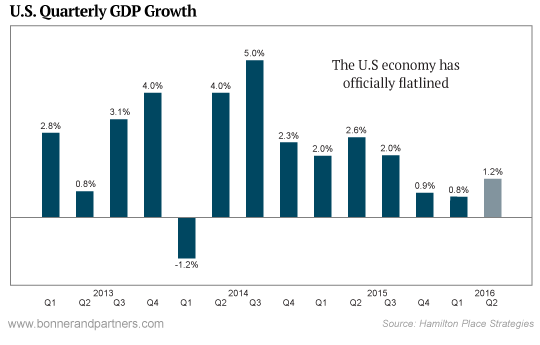 Yellen is handcuffed by weak growth, persistent deflationary trends, political gridlock, and eight years of market manipulation from which there appears to be no escape. Yet, there is one way for Yellen and the Fed to break free of their economic handcuffs, at least in the short run. Yellen’s only escape is to trash the dollar. Investors who see this coming stand to make spectacular gains.
Yellen and the Fed face as many constraints as Harry Houdini did in trying to escape a potential collapse of confidence in the U.S. dollar and a possible sovereign debt crisis for the United States. Let’s look at some of the constraints on Yellen – and the possible “tricks” she might use to escape.
The first and most important constraint on Fed policy is that the U.S. economy is dead in the water. Quarterly GDP figures have been volatile over the past three years, with annualized real growth as high as 5% in the third quarter of 2014 and as low as minus 1.2% in the first quarter of 2014. We have not seen persistent growth or a definite trend – until now. Finally, there is a trend, and it’s not a good one.