By Deborah Snow and Peter Hannam

(Sydney Morning Herald) – The Earth is warming so rapidly that unless humans can arrest the trend, we risk becoming ''extinct'' as a species, a leading Australian health academic has warned.

Helen Berry, associate dean in the faculty of health at the University of Canberra, said while the Earth has been warmer and colder at different points in the planet's history, the rate of change has never been as fast as it is today. 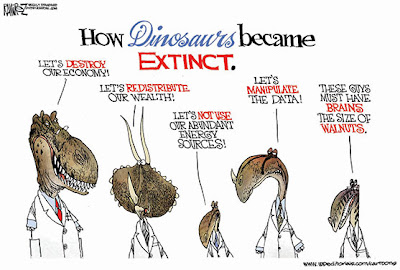 ''What is remarkable, and alarming, is the speed of the change since the 1970s, when we started burning a lot of fossil fuels in a massive way,'' she said. ''We can't possibly evolve to match this rate [of warming] and, unless we get control of it, it will mean our extinction eventually.''

Professor Berry is one of three leading academics who have contributed to the health chapter of a Intergovernmental Panel on Climate Change (IPCC) report due on Monday. She and co-authors Tony McMichael, of the Australian National University, and Colin Butler, of the University of Canberra, have outlined the health risks of rapid global warming in a companion piece for The Conversation, also published on Monday. The three warn that the adverse effects on population health and social stability have been ''missing from the discussion'' on climate change.

''Human-driven climate change poses a great threat, unprecedented in type and scale, to wellbeing, health and perhaps even to human survival,'' they write.

They predict that the greatest challenges will come from undernutrition and impaired child development from reduced food yields; hospitalisations and deaths due to intense heatwaves, fires and other weather-related disasters; and the spread of infectious diseases.

They warn the ''largest impacts'' will be on poorer and vulnerable populations, winding back recent hard-won gains of social development programs.