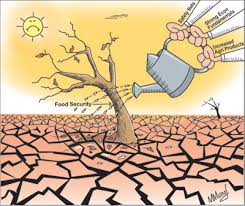 Report by climate change panel says global warming is fuelling not only natural disasters, but potentially famine – and war
By Suzanne Goldenberg
Climate change has already cut into the global food supply and is fuelling wars and natural disasters, but governments are unprepared to protect those most at risk, according to a report from the UN's climate science panel.
The report is the first update in seven years from the UN's international panel of experts, which is charged with producing the definitive account of climate change.
In that time, climate change has ceased to be a distant threat and made an impact much closer to home, the report's authors say. "It's about people now," said Virginia Burkett, the chief scientist for global change at the US geological survey and one of the report's authors. "It's more relevant to the man on the street. It's more relevant to communities because the impacts are directly affecting people – not just butterflies and sea ice."
The scientists of the Intergovernmental Panel on Climate Change found evidence of climate change far beyond thawing Arctic permafrost and crumbling coral reefs – "on all continents and across the  oceans".
But it was the finding that climate change could threaten global food security that caught the attention of government officials from 115 countries who reviewed the report. "All aspects of food security are potentially affected by climate change," the report said.

Or Watch it Melt Away...