Despite no specific evidence of Iranian involvement, the US treat Yemen’s Houthi rebels as tame creatures of Tehran 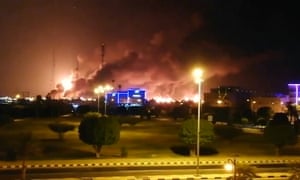 The claim by US officials that Iran was responsible for the oilfields attack came with no marshalled public evidence. Photograph: Reuters

The US secretary of state Mike Pompeo’s bald claim this weekend that Iran was responsible for the attack on the Saudi oilfields came with no marshalled public evidence, but dampens any likelihood that Donald Trump will countenance a meeting with Tehran in the near future or press ahead with tentative peace talks with Houthi rebels in Oman.
Lindsey Graham, one of Trump’s foreign policy supporters in the Senate, was clear talks with Iran are now off the agenda saying: “The Iranian regime is not interested in peace – they’re pursuing nuclear weapons and regional dominance.”
For the moment Europe is not attributing blame. Britain in its statement condemning the attack did not explicitly blame Iran, but called on the Houthis to desist.