"Hard to say whether Saudi Arabia is following Venezuela's huge production drop as both had notoriously overstated their reserves. The Saudi's conventional fields are very long in the tooth.  Lets not forget MIT's - "Limits to Growth" - research book that predicted a major drop in resources around 2020, and so far their predictions have been fairly accurate, as evidenced by the graph below and the follow-up report 30 years later. It appears we are closing in on a new era - as cheap conventional oil runs dry. What's next is anybody's guess. " By Ron Patterson
Data for the OPEC charts below were taken from the October OPEC Monthly Oil Market Report
OPEC 14 crude oil production was down1,318,000 barrels per day in September. Most of that decline was due to the Iranian attack on the Saudi oil complex at Abqaiq. ( The question is whether this attack may have been staged to distract attention from the bigger production decline issue and overstated reserves?)
READ MORE
LIMITS TO GROWTH 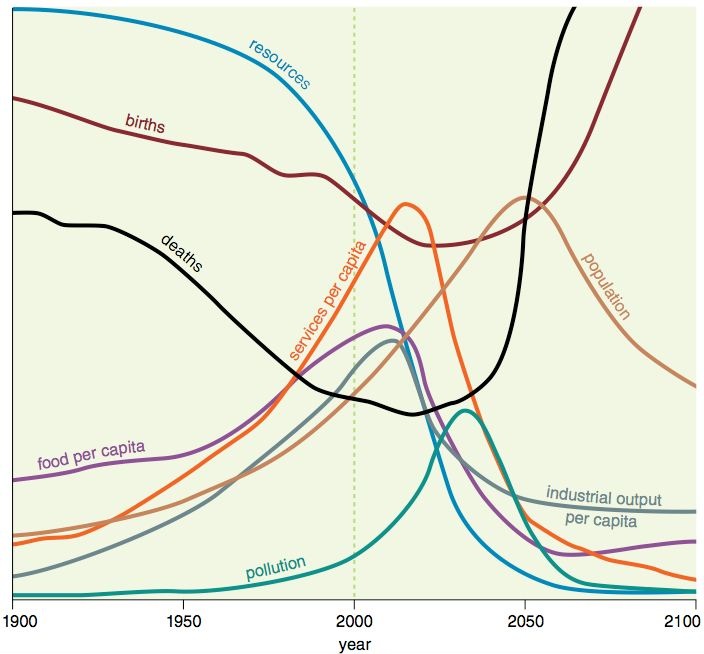 KEY CONCLUSIONS
After reviewing their computer simulations, the research team came to the following conclusions:[1]:23–24

The signs are everywhere around us:
These are symptoms of a world in overshoot, where we are drawing on the world’s resources faster than they can be restored, and we are releasing wastes and pollutants faster than the Earth can absorb them or render them harmless. They are leading us toward global environmental and economic collapse—but there may still be time to address these problems and soften their impact.
READ MORE

“It's an empty feeling in your stomach that these same birds that you grew up with just aren't there anymore.”


By Jeremy Deaton
Pete Marra remembers birdwatching in the woods behind his childhood home in Norwalk, Connecticut, in the 1970s, gazing up at common nighthawks as they extended their long, pointed wings and soared through the air. “They were these aerial acrobats,” he said. “They did ballet.”
By the time he got to high school, the woods had been cut down to make room for houses, and the nighthawks had begun to disappear. Today the bird has all but vanished from his old neighborhood.
“They're rare in Connecticut now. They're rare in many places,” said Marra, now an ecologist who is the director of the Georgetown Environment Initiative. “It's an empty feeling in your stomach that these same birds that you grew up with just aren't there anymore.” Pete Marra is an ecologist and the director of Georgetown University’s environment initiative in Washington, D.C.
READ MORE

#CliamteCrisis: We Failed To Act On #Climate For FIFTY Years


"Until our leaders implement major policy changes to mitigate the climate crisis, Greta’s generation will be wholly justified in lecturing them for selfishly frittering away the stability of our global climate."

This story is part of Covering Climate Now, a global collaboration of more than 300 news outlets to strengthen coverage of the climate story.

Greta Thunberg is a painful reminder of decades of climate failures

Sixteen-year-old Swedish climate activist Greta Thunberg has ignited the climate movement, most recently taking a zero-carbon ocean voyage to America to attend the September 23rd UN climate summit in New York City. She’s become so effective and inspiring that those who want to maintain the status quo—predominantly wealthy and powerful old white men—have begun to attack her. Greta has been called “the international mascot for climate alarmism … mentally unstable,” “a millenarian cult leader,” a “deeply disturbed messiah of the global warming movement,” a “teenage puppet,” a “petulant child,” and much more.
Greta articulated her views in a TEDx talk in which she accurately described the state of climate science and the fact that if we are to meet the Paris climate targets, developed countries in particular must rapidly reduce their carbon pollution. As Greta notes, the world has thus far failed to act, in part because most people don’t realize that rapid change is required.

YOU ARE STEALING OUR FUTURE

"Organisers said record numbers marched in countries around the world, sending a clear message to politicians meeting in New York" 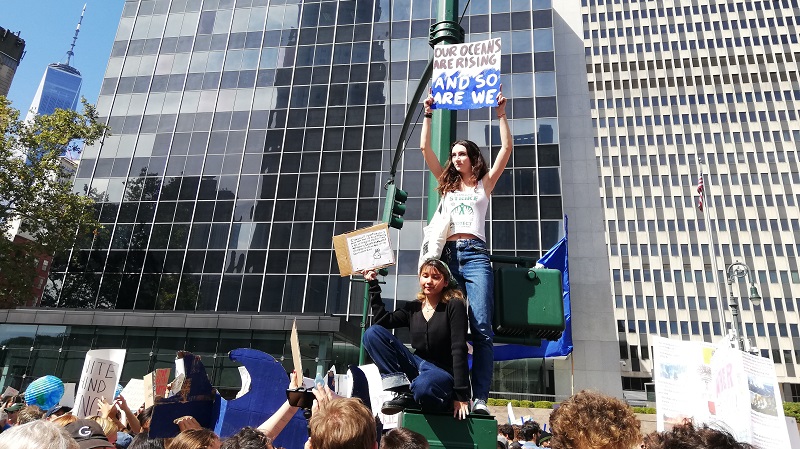 Hundreds of thousands of young people took to the streets in New York demanding governments do more to tackle the climate crisis (Photo: Chloé Farand)

By Chloé Farand and Jill Russo

More than four million people have taken part in an unprecedented wave of climate protests across the world, organisers said, in the most powerful message to governments yet to take serious action.

Hundreds of thousands of people, mostly young people, some accompanied by parents, gathered in Foley Square in front of the Thurgood Marshall courthouse in downtown Manhattan in September heat, waving colourful hand-painted placards. 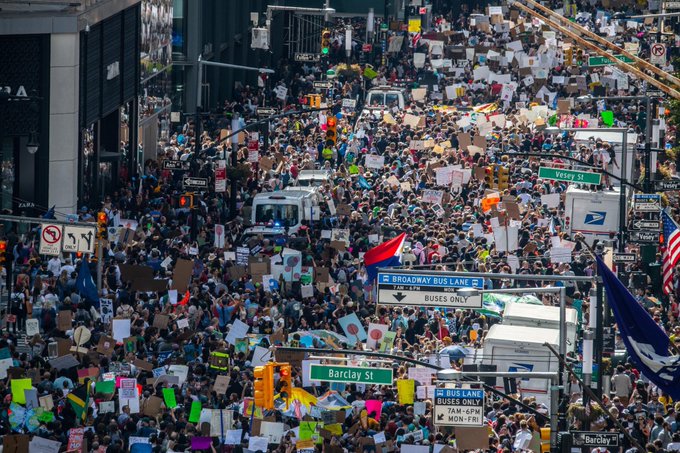 
At this unprecedented pivital juncture in human history Dr Peter G Kinesa's Digest is pleased to annouce its support and endorsement of the beliefs, policies and actions of:

Post Carbon Institute provides individuals and communities with the resources needed to understand and respond to the interrelated ecological, economic, energy, and equity crises of the 21st century. We help build resilience to withstand these crises, and support social and cultural change to make society more ready to take decisive and appropriate action. Specifically, we:

"But even if hope has to be held lightly in the steely-eyed recognition of what we face, we still must take action. Much of that action comes back to our own backyards."

Tomorrow begins Global Climate Strike Week, led by young people to demand urgent action to address the climate emergency. What many hope will be a sea change moment in the struggle to mobilize a real response to this existential threat had a humble start a year ago when a young Swedish student, Greta Thunberg, began spending her Fridays protesting in front of the Swedish Parliament. Inspired by Greta’s example—and her blunt, uncompromising stance—millions of students have since joined her in the “Fridays for the Future” movement. This week is an opportunity for the rest of us to participate.
I will be out on the streets tomorrow and the following Friday in my hometown, and I’ll be joining a number of other activities planned locally over the coming week. PCI is supporting our staff to actively participate in the various communities where they live. We’d like to encourage you to do the same. Visit the Climate Strike website to find activities near you. 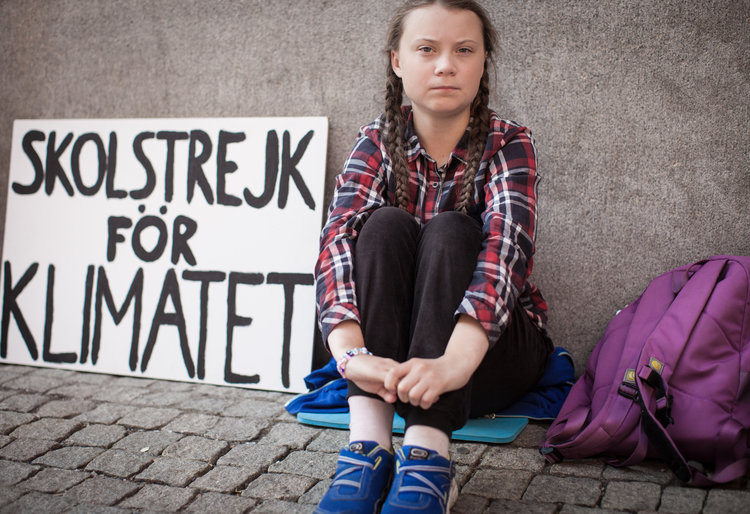 The Most Important Speech Ever

"Intermittent electricity, because of its tendency to drive other providers to bankruptcy, will tend to make the grid fail more quickly than it would otherwise. The big danger ahead seems to be bankruptcy of electricity providers and of fossil fuel producers, rather than running out of a fuel such as oil or natural gas." 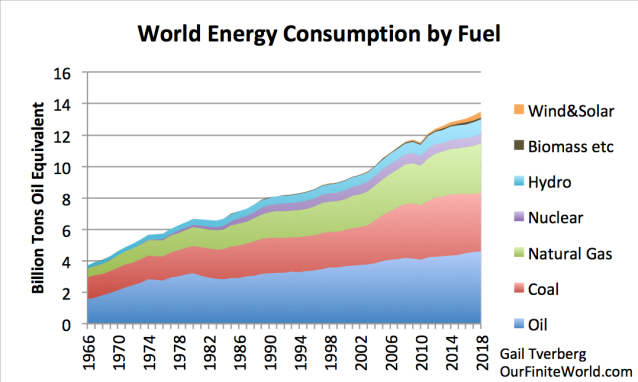 Powering the world’s economy with wind, water and solar, and perhaps a little wood sounds like a good idea until a person looks at the details. The economy can use small amounts of wind, water and solar, but adding these types of energy in large quantities is not necessarily beneficial to the system.
While a change to renewables may, in theory, help save world ecosystems, it will also tend to make the electric grid increasingly unstable. To prevent grid failure, electrical systems will need to pay substantial subsidies to fossil fuel and nuclear electricity providers that can offer backup generation when intermittent generation is not available. Modelers have tended to overlook these difficulties. As a result, the models they provide offer an unrealistically favorable view of the benefit (energy payback) of wind and solar.
If the approach of mandating wind, water, and solar were carried far enough, it might have the unfortunate effect of saving the world’s ecosystem by wiping out most of the people living within the ecosystem. It is almost certain that this was not the intended impact when legislators initially passed the mandates. 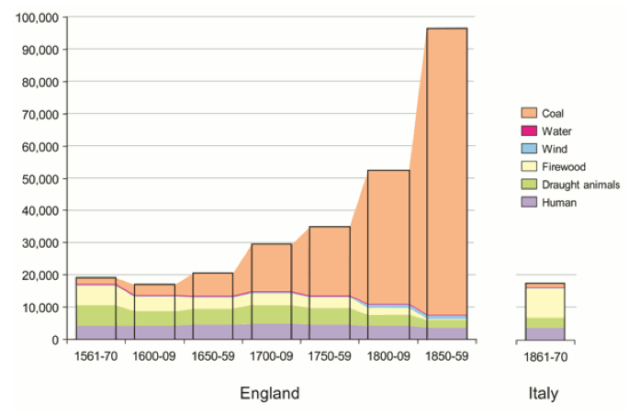 1] History suggests that in the past, wind and water never provided a very large percentage of total energy supply