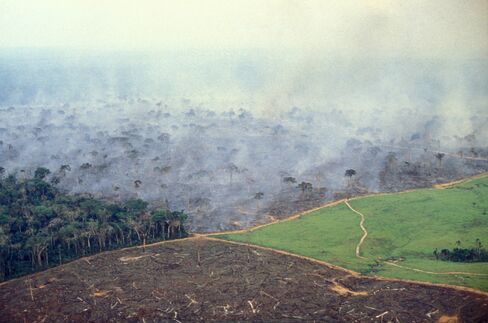 Deforestation in the Amazon region dropped by 30 percent  from 2005 to 2010, sparing trees that soak up carbon dioxide. A big win in the fight against climate change, right?
Maybe not big enough to save the planet, or the species on it.
After trees are cut down, they gradually decay, releasing carbon, degrading the habitat, and threatening species long after the cutting stops. These lagging emissions have an important impact on the battle against global warming, a study released today in the journal Current Biology finds. Even with the 30 percent reduction in Amazon deforestation, there was only a 10 percent decrease in carbon emissions, the researchers found. 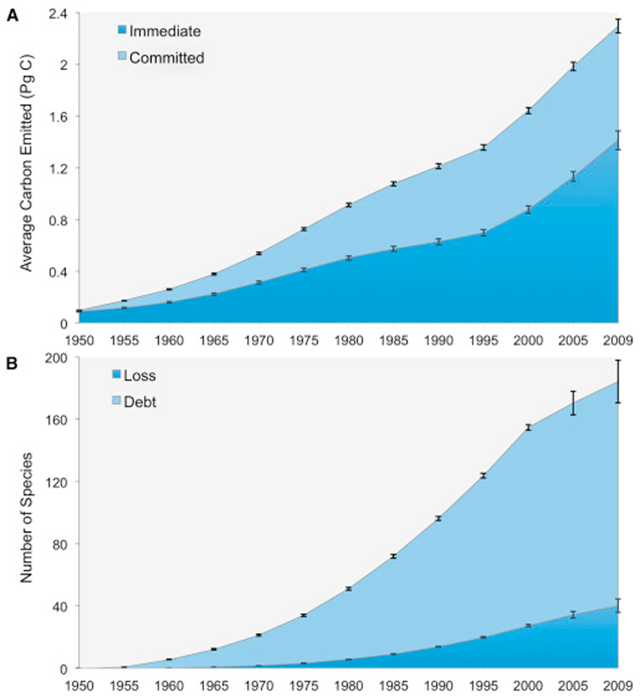 And even if tropical deforestation had ended altogether in 2010, there would still be 8.6 petagrams (10 to the 12th kilograms) of emissions released into the atmosphere as trees decomposed, the equivalent of five to 10 years of global deforestation. That's roughly the annual amount of total global emissions, said Abigail Swann, a University of Washington professor who studies climate change and who wasn't involved in the study.
Bloomberg

Because the subtropical regions support conditions conducive for arid climates, deserts will march northward into more densely-inhabited regions. Under continued fossil-fuel burning, the Sahara Desert leaps across the Mediterranean and fully expands into southern and central Europe.
http://onlinelibrary.wiley.com/doi/10.1002/wcc.81/full


A spate of real-time clocks – watch the numbers

93.4% of global warming goes into oceans.

Here's Why Wages Have Stagnated--and Will Continue to Stagnate

The only way to reverse declines in labor participation and stagnation in wages and demand is to make it easier to start enterprises and hire people.
Mainstream economists are mystified why wages/salaries are still stagnant after 7+ years of growth / "recovery." The conventional view is that wages should be rising as the labor market tightens (i.e. the unemployment rate is low) and demand for workers increases in an expanding economy.
But wages are only rising significantly for the top 5%, while workers between the bottom 81% who have seen their household incomes decline and the top 5% are experiencing stagnant earnings.