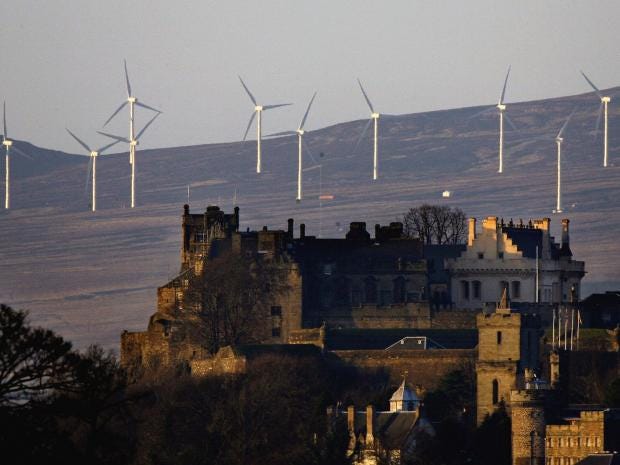 For the first time on record, wind turbines have generated more electricity than was used in the whole of Scotland on a single day.
An analysis by conservation group WWF Scotland found unseasonably stormy weather saw turbines create about 106 per cent of the total amount of electricity used by every home and business in the country on 7 August.
Gale-force winds lashed much of the country with a speed of 115mph recorded at the top of Cairngorm mountain.
A 17,000-tonne oil rig broke away from a tug in the early hours of Monday morning and later ran aground near Carloway on the Isle of Lewis.
And train services were cancelled as trees were blown onto the tracks, various events had to be cancelled and parts of Dundee were hit by a power cut.
The Independent

Washington’s Strategic Defeat: Erdogan Trumps Gulenist Coup
Erdogan was aware of the growing power of the Gulenists and their growing links to Washington.  Erdogan moved decisively  and successfully, to pre-empt the Gulenist power grab by forcing a premature coup.
http://www.globalresearch.ca/washingtons-strategic-defeat-erdogan-trumps-gulenist-coup/5540200

An Updated Version Of The “Peak Oil” Story
The attempt by governments to fix the oil shortage problem didn’t really work. Instead, it led to the opposite mismatch from the one we were expecting. We got an oversupply problem–a problem of finding enough space for all our extra supply
http://www.countercurrents.org/2016/08/09/an-updated-version-of-the-peak-oil-story/

7 robots that are replacing farm workers around the world

The rover, a bot that herds cattle.University of Sydney
In the future, robots will increasingly replace farm workers, using artificial intelligence to plant, grow and harvest our food.
In fact, many farms are already using fleets of robots, which can tend to fruits and veggies more efficiently than a human can.
Here's a look at seven machines that are currently aiding farmers around the world.

French inventor Christophe Millot created an autonomous bot, called the Wall-Ye, that helps to prune and harvest grapes at vineyards.
Using infrared sensors and scissor-hands, it can detect and snip weak vines as well as monitor the health of the soil and grapes.
Before it can start working, the system is programmed with a map of the vineyard so that it knows where to go.

Business Insider
Posted by Unknown at 7:30:00 AM