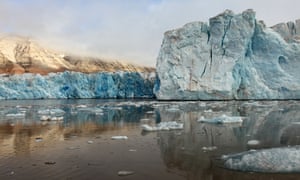 The media largely relegate the greatest challenge facing humanity to footnotes, as industry and politicians hurtle us towards systemic collapse of the planet

What is salient is not important. What is important is not salient. The media turns us away from the issues that will determine the course of our lives, and towards topics of brain-melting irrelevance.

This year's wildfires are bad. Climate change will make future ones worse

Anthony LeRoy Westerling
Read more
This, on current trends, will be the hottest year ever measured. The previous record was set in 2015; the one before in 2014. Fifteen of the 16 warmest years have occurred in the 21st century. Each of the past 14 months has beaten the global monthly temperature record. But you can still hear people repeating the old claim, first proposed by fossil fuel lobbyists, that global warming stopped in 1998.
Arctic sea ice covered a smaller area last winter than in any winter since records began. In Siberia, an anthrax outbreak is raging through the human and reindeer populations because infected corpses locked in permafrost since the last epidemic in 1941 have thawed. India has been hammered by cycles of drought and flood, as withering heat parches the soil and torches glaciers in the Himalayas. Southern and eastern Africa have been pitched into humanitarian emergencies by drought. Wildfires storm across America; coral reefs around the world are bleaching and dying.
Throughout the media, these tragedies are reported as impacts of El Niño: a natural weather oscillation caused by blocks of warm water forming in the Pacific. But the figures show that it accounts for only one-fifth of the global temperature rise. The El Niño phase has now passed, but still the records fall. 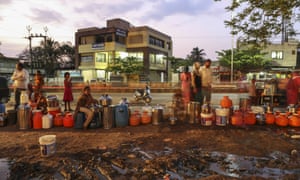 People wait to fill water containers during a drought in Latur, India, April 2016.

Eight months ago in Paris, 177 nations promised to try to ensure the world’s average temperature did not rise by more than 1.5C above the pre-industrial level. Already it has climbed by 1.3C – faster and further than almost anyone predicted. In one respect, the scientists were wrong. They told us to expect a climate crisis in the second half of this century. But it’s already here.

• A fully referenced version of this article can be found at monbiot.com. Twitter:@georgemonbiot

How to Arm a “Volatile” Planet

The U.S. political system is also a global arms distribution system. During Obama’s first six years in office, Washington entered into agreements to sell more than $190 billion in weaponry worldwide — more than any US administration since World War II.  Obama has loosened restrictions on arms exports, making it possible to send abroad a whole new range of weapons and weapons components with far less scrutiny than was previously required.
http://lobelog.com/how-to-arm-a-volatile-planet/

Is a Civil War Looming in Israel?

“We are on the verge of an uprising of hatred, racism, darkness and upcoming killings and assassination based on the overwhelming internal hatred here. We hear hatred at every turn, whether it is directed toward women by military rabbis, by Ashkenazi Jews against Sephardi Jews and Mizrahi Jews against Ashkenazis. This way the seeds of the uprising of hatred are planted, which will lead to a civil war. This hatred is being carried out by the full support and cover of those in charge.”
http://www.globalresearch.ca/a-civil-war-looming-in-israel/5538071

Economic Development and the Concept Of “Resistance Economy”

They are the instruments to buy corrupt government officials with unaccounted loans or credits that increase national debt and increase dependence on the western predatory corporate and finance system. Its neocolonialism at its best – nothing to do with ‘development of poor countries’. To the contrary – its debt-dependence for easy exploitation.
http://www.globalresearch.ca/economic-development-and-the-concept-of-resistance-economy/5537644

The bank’s latest move confirmed its strategic goal to “end the US dollar’s hegemony” and “forge a new global financial order.” In an article for the financial publication MarketWatch, research analyst David Marsh tried to suggest a wider strategy: “The world’s second-largest economy is embarking, pragmatically but steadily, toward enshrining a multicurrency reserve system at the heart of the world’s financial order.”
http://foreignpolicy.com/2016/07/22/chinas-currency-manipulation-actually-enhances-the-global-role-of-the-dollar-sdr-rmb-balance-of-payments/ 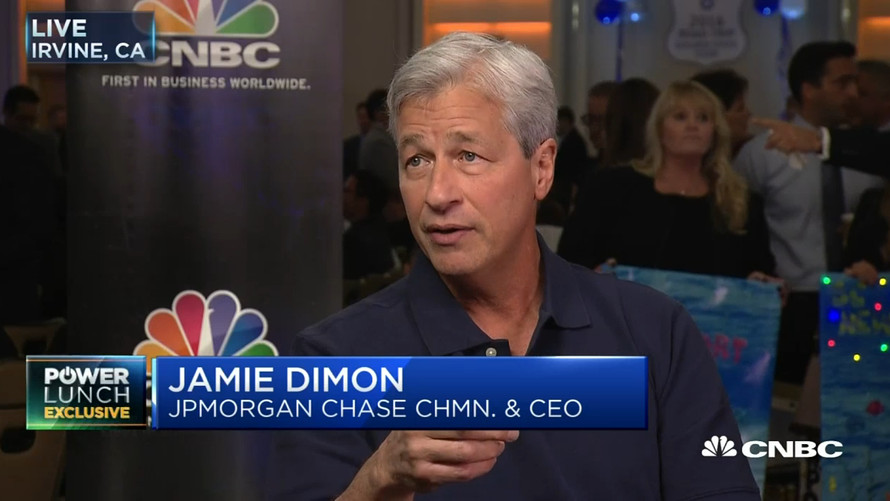 Jamie Dimon is in it for the long haul and isn’t being hassled by short-term data, even to the point of questioning whether quarterly GDP numbers are accurate anymore.
The chief executive and chairman of J.P. Morgan Chase & Co. JPM, +2.70%  told CNBC in an interview Monday that he isn’t bothered by second-quarter GDP growth of 1.2% at an annual rate, a reading that was well below forecasts.
Pointing to job creation, rising wages, increased household spending, and other signs that the economy is firming up, Dimon played down the GDP reading as a short-term data point.
“I wouldn’t overreact to short-term data,” Dimon said. “I’m not even sure GDP data is actually that accurate anymore.”
Dimon, however, did express that he wished it was growing faster, more in the neighborhood of 2%.
Market Watch
Posted by Unknown at 7:30:00 AM