Habitat destruction has reduced the variety of plants and animals to the point that ecological systems could become unable to function properly, with risks for agriculture and human health, say scientists 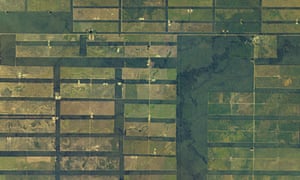 The variety of animals and plants has fallen to dangerous levels across more than half of the world’s landmass due to humanity destroying habitats to use as farmland, scientists have estimated.
The unchecked loss of biodiversity is akin to playing ecological roulette and will set back efforts to bring people out of poverty in the long term, they warned.
Analysing 1.8m records from 39,123 sites across Earth, the international study found that a measure of the intactness of biodiversity at sites has fallen below a safety limit across 58.1% of the world’s land.
Under a proposal put forward by experts last year, a site losing more than 10% of its biodiversity is considered to have passed a precautionary threshold, beyond which the ecosystem’s ability to function could be compromised.

The damage that was inflicted on the parliament building in Ankara was huge reminiscent of the Reichstag fire in Germany in 1933. The Reichstag fire marked the end of basic freedoms and critical thinking in Germany.
http://www.informationclearinghouse.info/article45124.htm

There is no return to normal. The vast expanse of contaminated forests and freshwater systems will remain a perennial source of radioactivity for the foreseeable future, as these ecosystems cannot simply be decontaminated.
http://www.commondreams.org/news/2016/07/21/greenpeace-extremely-high-jump-post-fukushima-radioactive-chemicals

There have not been so many children suffering the consequences of conflicts, crises and natural catastrophes since the Second World War. Some 250 million girls and boys, one in nine children, are forced to grow up in conflict zones. Even more are threatened by natural disasters such as droughts, floods and epidemics.
http://www.countercurrents.org/2016/07/15/unicef-report-reveals-250-million-child-victims-of-war/

Nearly 3,000 Migrants Have Died so far This Year in Mediterranean

Some disturbing figures about the upcoming banking crisis

Deutsche Bank has a capital level of less that 3% (just like Lehman), and a risky asset base with derivatives exposure of more than $70 trillion, roughly the size of world GDP. Even the IMF has stated unequivocally that Deutsche Bank poses the greatest risk to global financial stability. And the IMF would be right… except for all the other banks.
https://www.sovereignman.com/trends/some-disturbing-figures-about-the-upcoming-banking-crisis-19997/

The British pound could eventually hit parity with the US dollar.  We are seeing seismic shifts on the foreign exchange market right now that will affect trillions of dollars of currency-related derivatives.
http://theeconomiccollapseblog.com/archives/currency-crash-drives-british-pound-to-a-31-year-low-as-deutsche-bank-sinks-to-the-lowest-level-ever

Forecasters expect a high pressure ridge and extreme temperatures to combine to create what is referred to as a "heat dome" over large portions of the US. A heat dome occurs when high pressure in the upper atmosphere acts as a lid, preventing hot air from escaping. The air is forced to sink back to the surface, warming even further on the way. Heat index values for parts of the U.S. are expected to reach 110 degrees or higher.
http://www.nnvl.noaa.gov/imageoftheday.php

Last night, President Obama took the stage at the Democratic National Convention to throw his support to Hillary Clinton in her bid for the Presidency. He also took the opportunity to take a victory lap for his economic achievements while in office.
With the 2016 Presidential Election fast approaching, this was one of the final chances the President will have to try and divert attention away from Hillary’s “trustworthiness” problem following continued revelations surrounding Benghazi, email scandals and the Clinton Foundation which is now under investigation by the IRS.
The problem for the Democrats currently, following a rather severe beating at the polls during the 2012 mid-terms, is the broad loss of faith in “hope and change.” With Donald Trump and Hillary Clinton virtually tied in the majority of polls(within a margin of error), it is imperative to regain those voters. Not surprisingly, since voters tend to “vote their pocketbook,” it wasn’t surprising to hear the President spin a decisively positive economic picture during his speech.He hopes that by pointing to falling unemployment rates, economic growth and higher confidence levels; it will give voters a sense of confidence in the President’s accomplishments and be convinced the expect the same for Hillary.
The question is whether the majority of the voting public will agree with the President’s message? Let’s take a look at some charts.