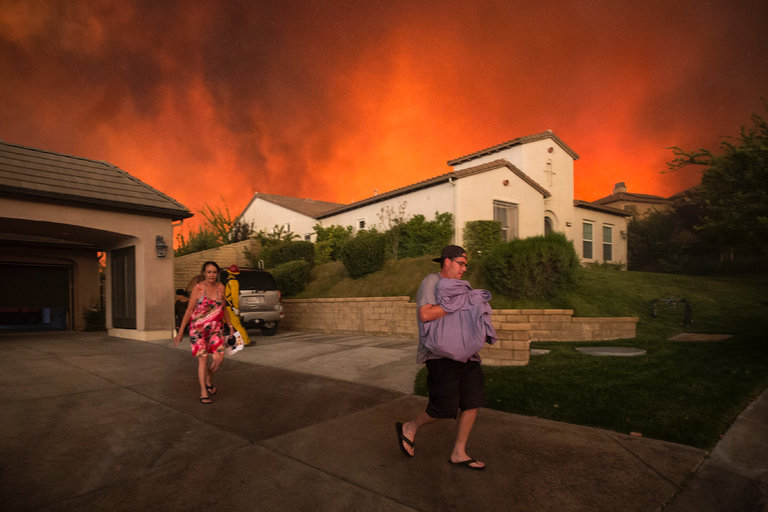 More than 900 firefighters were combating a wildfire across 20,000 acres in the mountains north of Los Angeles and near Big Sur on California’s coast on Saturday night, prompting the authorities to order evacuations and close roads, the United States Forest Service said on Twitter.
The evacuations encompassed about 1,500 homes, the Los Angeles County Sheriff’s Department said. One structure was reported destroyed and 100 commercial buildings were threatened. Ten percent of the fire had been contained, the Forest Service said Saturday night.
No information on injuries was immediately available.
Firefighters contended with triple-digit temperatures and winds of up to 26 miles per hour on Saturday. The weather was not expected to improve on Sunday, with hot, dry conditions and wind gusts forecast.
Images posted on Twitter showed the sky tinted orange and pink, as flames and smoke dominated the landscape.
The New York Times

Most Australians (53%) believe there is a 50% or greater chance our way of life will end within the next 100 years, and a quarter that humans will be wiped out. These are surprisingly high estimates; no organisation would accept this level of risk. In response, 75% agreed we need to transform our worldview and way of life (an 'activist' response); 44% agreed that the world's future looks grim so we have to focus on looking after ourselves and those we love (nihilism); and 33% agreed that we are facing a final conflict between good and evil in the world (fundamentalism).
http://www.climatecodered.org/2015/09/why-we-need-politics-of-far-future.html

The Earth has now warmed by more than 1 C above Preindustrial temperatures. And 1-2 C warming from this baseline in the Eemian resulted in a 10-20 foot rise in ocean levels. We’re in this temperature range now.
https://robertscribbler.com/2016/07/21/large-sections-of-greenland-covered-in-melt-ponds-dark-snow/

This is worth watching
https://www.sciencedaily.com/videos/436119.htm

We have a environment secretary whose ideology urges her to see the environment as an impediment to profit, a communities secretary whose every fibre rebels against the planning system and an international trade secretary who used his previous post in government to connect mysteriously with American corporate lobby groups. We no longer have a climate change secretary, of any description. We have a government that treats the Earth’s systems, upon which our survival depends, as an afterthought. Or not a thought at all.
http://www.monbiot.com/2016/07/21/punishment-posting/

In China meeting, G20 has chance to soothe post-Brexit jitters

Finance heads from the world's leading economies will confront fresh fears about protectionism when they meet in China this weekend, with Brexit fallout and dwindling policy options to boost global growth expected to dominate talks.


The Group of 20 finance ministers and central bankers meeting will put the spotlight on Britain's new Chancellor of the Exchequer, Philip Hammond, who makes his international debut at the gathering and will need to answer questions about how London will manage its exit from Europe.


Also overhanging the G20 meeting in the southwestern city of Chengdu will be Donald Trump's U.S. Presidential campaign in which protectionist themes are expected to be central, after his official nomination as the 2016 Republican candidate this week.


"(On Brexit), the focus will be on what message G20 can deliver to ease concerns," said an Asian financial official involved in G20-related issues. "We still need to remain vigilant."


The International Monetary Fund this week cut its forecast for global growth, specifically on Britain's vote to leave the European Union.
Reuters