EYE on the World - A Tale of Two Paradises

" Stories Going Beyond the Mainstream " 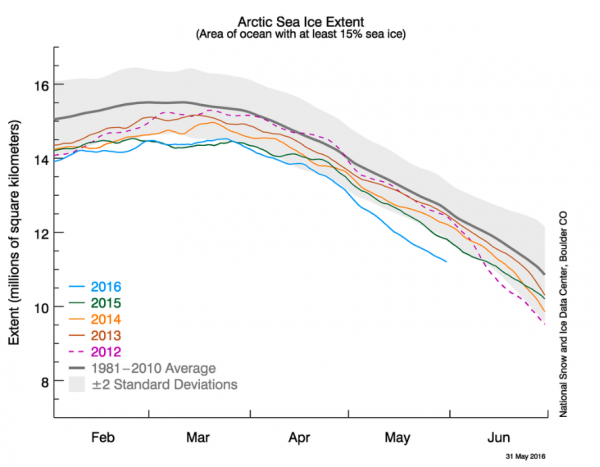 Arctic Sea Ice Breaks May Record . . . By A Lot

Arctic sea ice shrank to its lowest level in 38 years last month, setting a record low for the month of May and setting up conditions for what could become the smallest Arctic ice extent in history, according to National Snow and Ice Data Center data released Tuesday.
“We didn’t just break the old May record, we’re way below the previous one,” NSIDC Director Mark Serreze said.

Pity the Poor Central Bankers: Playing Masters of the Universe Is No Longer Fun

It was fun playing Masters of the Universe when expectations were low.

Ah, the good old days, when a simple, completely empty promise to do whatever it takes could move the world. It was fun being a central banker back in the good old days--back then playing Master of the Universe was wondrously good fun.
Now--not so fun. Now that interest rates are drifting below zero, there's not much room for fun left in that sandbox.
As for mortgage rates: they're so low, some countries are effectively paying people to take out a mortgage, and the resulting bubbles and market distortions are no fun.

Turmoil has jumped as June 23 draws close and polls show Britons are increasingly set to vote to Leave the European Union (EU).

With rising uncertainty over the eurozone's future, panic is setting in and stock sell-offs are gathering pace.
London's FTSE 100 plunged by more than two per cent this morning, and has now fallen below the 6,000 mark for the first time since February.
Markets in Europe continued to nurse heavy losses, which started last week.

IS A HOUSE OF CARDS

City
council needs to prepare for the


correction in the housing market that the Bank of Canada governor says is just around the corner
For almost two decades, Torontonians lucky enough to get mortgage approval have been buying into an increasingly inflated housing market and thinking they're sitting on a gold mine.
Instead, some may find themselves atop a house of cards.
Last week, Bank of Canada Governor Stephen Poloz warned in his semi-annual Financial System Review about a potential drop in real estate prices in Toronto and Vancouver. He said Toronto's rising prices are "unlikely to be sustained."

​
The recovery in oil, which has rallied 80 percent from lows reached in February, remains “fragile” as disrupted supplies return to market and prolong a global surplus, according to Goldman Sachs Group Inc. Canadian output halted by wildfires is resuming, OPEC members are pumping more than expected and the price rebound may revive shale drilling in the U.S., the bank said in a report. Goldman maintained its forecast that U.S. crude will trade at $49 a barrel in three months’ time.

Temperatures of up to 35C force exodus to river and lake beaches.

The abnormally hot weather has seen temperatures some 8C above average across a vast swathe of southern Siberia.
On 12 June - Russia Day - new records were set in Novosibirsk (30.4C) and  Tomsk (31.5C), and in Tuva Republic (31.7C).
The Saudi Arabian-like heat wave, still ongoing, has stretched to the east of Krasnoyarsk region, with the highest temperature being 35C.
Over the next two days southern Siberia will remain abnormally hot, some 7C higher than average

Reaching hundreds of thousands globally, with partners and private communities in Zurich, New York, London, Moscow, Tokyo, Hong Kong,  Toronto and Beverly Hills, California
"It is the little things we do everyday that makes the big difference.