Protesters take part in a demonstration against the Transatlantic Trade and Investment Partnership free trade agreement in Hannover, Germany, April 23, 2016.

UPDATE: 6 a.m. EDT — Greenpeace on Monday released a raft of leaked documents detailing talks between the European Union and the United States regarding a far-reaching free-trade deal. In a statement,  the environmental nonprofit said "grave concerns" over environment and public health in the EU were laid bare in the 248 pages of leaked Transatlantic Trade and Investment Partnership negotiating texts.
"These documents make clear the scale and scope of the trade citizens of the United States and the European Union are being asked to make in pursuit of corporate profits. It is time for the negotiations to stop, and the debate to begin," Sylvia Borren, executive director of Greenpeace Netherlands, said in the statement. "We call on the negotiators to release the latest, complete text to facilitate that discussion, and we ask that the negotiations be stopped until these questions, and many more have been answered. Until we can fully engage in a debate about the standards we and our planet need and want."
International Business Times
Listen Carefully for Hints of the Next Global Recession
In fact, it’s instructive to remember that global recessions have usually begun suddenly and been a real surprise to most people. As I have argued in this column and with George A. Akerlof in “Animal Spirits” (Princeton 2009), such events can largely be ascribed ultimately to contagious stories of wide significance. Basically, global recessions tend to begin when newly popular narratives reduce individuals’ motivation to spend money. Psychology matters a great deal.

How Microgrids May Transform The Future Of Energy
The study found that the Western Australia grid could be replaced by 85 percent renewable energy at a cost $124 per MWh versus $127 per MWh for a replacement conventional system. The cheaper renewable system relies on roughly 5,000 MW of wind power, 2,000 MW of solar PV combined with battery storage and molten salt solar storage. Using a distributed grid of thousands of PV installations and hundreds of wind generators reduced costs, according to the researchers. This cost reduction was due in large part to reduced need for thousands of miles of electrical poles, wires, transformers, and associated maintenance labor.

Dredging of Miami Port Badly Damaged Coral Reef, Study Finds
South Florida has the only coral reef in the continental United States and 80 to 90 percent of it has died or been badly harmed over the years, officials say. The causes include ocean temperatures that have dipped too low or risen too high, acidification, sewage and pollution. Several cycles of white plague disease, including one in 2014 that coincided with the dredge, have also badly hurt South Florida’s reef. White plague, a virus that bleaches and kills coral, has been destroying reefs around the world.

“A typical person is more than five times as likely to die in an extinction event as in a car crash,” says a new report. 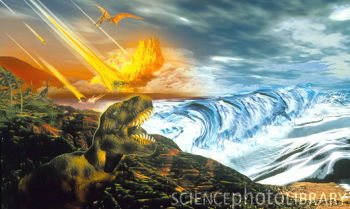 And that number probably underestimates the risk of dying in any global cataclysm. The Stern Review, whose math suggests the 9.5-percent number, only calculated the danger of species-wide extinction. The Global Challenges Foundation’s report is concerned with all events that would wipe out more than 10 percent of Earth’s human population.
“We don’t expect any of the events that we describe to happen in any 10-year period. They might—but, on balance, they probably won’t,” Sebastian Farquhar, the director of the Global Priorities Project, told me. “But there’s lots of events that we think are unlikely that we still prepare for.”