Mark Petersen, chief of the USGS National Seismic Hazard Mapping Project, said that "by including human-induced events, our assessment of earthquake hazards has significantly increased in parts of the U.S.."

Oil and gas drilling has made parts of the central United States as dangerous as the most earthquake-prone regions of California, according to the U.S. Geological Survey (USGS), exposing millions of people to the risk of human-induced earthquakes, known as "frackquakes."

According to new maps released on Monday by the USGS, roughly 7 million people who live and work in parts of Oklahoma, Kansas, Texas, Colorado, New Mexico, and Arkansas face "potential for damaging shaking from induced seismicity," which the USGS notes is triggered primarily by wastewater disposal from oil and gas drilling activities.

What we had as a result was a tectonic geopolitical shift; the reconfiguration of the entire world balance of power as Russia and China deepened their strategic partnership, based on a mutual external threat coming mostly from the US, with the EU as accessories. Russian intelligence now knows the alliance makes Russia and China invulnerable, whereas separately they could easily fall victim to US Divide and Rule.
https://www.rt.com/op-edge/315731-russia-kommersant-moscow-kremlin/

We speak to author Naomi Klein, and ask UN Climate Chief Christiana Figueres if the Paris deal is too little, too late.
http://www.aljazeera.com/programmes/upfront/2016/03/capitalism-driving-climate-change-160318152551036.html

Globally as in Australia, residential solar is a people-led revolution

Surge in renewable energy reduces world greenhouse gas emissions. Falling coal use in China and the US and a shift towards renewable energy globally saw energy emissions level for the second year running,
http://www.theguardian.com/environment/2016/mar/16/surge-in-renewable-energy-stalls-world-greenhouse-gas-emissions

Bloomberg Carbon Clock
In the 800,000 years before industrialization, the CO2 level hovered around 280 ppm. But the 20th century saw a sharp increase that continues today. The CO2 level is now around 400 ppm. The danger zone? 450 ppm, which we may hit by 2040. Beyond that, the warming Earth and its inhabitants will likely experience extreme weather events, increased sea-level rise, and their consequent ecological and economic impacts. 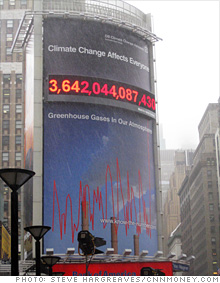 Methodology
What the Clock Shows
Fossil-fuel burning and deforestation are the main drivers of global warming. The CO2 they give off makes up more than 75 percent of annual climate pollution. The Bloomberg Carbon Clock is a real-time estimate of the global monthly atmospheric CO2 level.
The following methodology is a nontechnical explanation of how the carbon clock works. The full version, which includes all the math and science underpinning the project, can be found HERE. The graphic draws on CO2 data released from the NOAA Mauna Loa Observatory. The Scripps Institution of Oceanography pioneered CO2 monitoring in March 1958 at the observatory in Hawaii. The National Oceanic and Atmospheric Administration started a parallel effort there in May 1974. Today, NOAA maintains a global network of observatories, sampling towers, flights, and flasks to measure the composition of the atmosphere.
READ MORE
http://www.bloomberg.com/graphics/carbon-clock/