This Was Done, Like So Many Things These Days, So the Rich Could Get a Big Tax Break.

When Gov. Snyder took office in 2011, one of the first things he did was to get a multi-billion dollar tax break passed by the Republican legislature for the wealthy and for corporations. But with less tax revenues, that meant he had to start cutting costs. So, many things—schools, pensions, welfare, safe drinking water—were slashed. Then he invoked an executive privilege to take over cities (all of them majority black) by firing the mayors and city councils whom the local people had elected, and installing his cronies to act as “dictators” over these cities.

An obsession around governmental austerity...is really dangerous and that's really the lesson we had all better learn really fast' 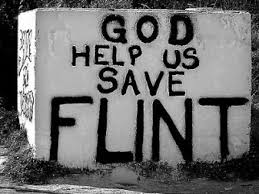 The congressman who represents Flint, Michigan has lambasted what he says is at the heart of his city's water crisis: austerity.

Speaking at the White House Water Summit, which took place Tuesday, U.S. Rep. Dan Kildee (D) said, "I think the story of Flint, in part, is a story about water infrastructure. Because when we have aging infrastructure, particularly in Flint with so many lead service lines, we are at risk."

"But, the other part of the story, which is really the trigger to the crisis in Flint, is a story about the effect or the consequence of a brand of governmental austerity that is really dangerous," the Flint native continued.

"That backdrop [of aging infrastructure], with the overlay of governmental austerity that minimizes the need for robust enforcement of environmental protection, by essentially making it a second almost afterthought at the state level, and essentially defunding direct support for the city itself, created a series of almost unbelievable decisions to go from using the Great Lakes—the greatest surface fresh water source on the planet, which is only a few miles away from Flint, to the Flint river as a temporary water source, untreated," he said.
READ MORE
http://www.commondreams.org/news/2016/03/23/congressman-obsession-austerity-triggered-flint-water-crisis

The Bernie Sanders voters who would choose Trump over Clinton

Both Trump and Sanders are non-establishment candidates not bought by the special interests. Both are outsiders who understands that the government and the economy are broken.
http://www.theguardian.com/us-news/2016/mar/13/bernie-sanders-supporters-consider-donald-trump-no-hillary-clinton

Analysis Of The Russian Military Pullout From Syria

The Russian intervention is a stunning success, that is indisputable, with a small force and  limited goals: the legitimate authority of the Syrian government has been stabilized and the conditions for a political compromise have been created.
http://thesaker.is/analysis-of-the-russian-military-pullout-from-syria/

Far from being a bridge to the future,' McKibben tells Common Dreams, 'natural gas turns out to have been a costly detour.'

With a new piece in The Nation, environmental leader Bill McKibben upends widely held assumptions not just about President Barack Obama's climate legacy, but about the so-called "natural gas revolution" that was once considered a "savior" in the fight against global warming.
The author and 350.org co-founder points to "an explosive paper" published last month in Geophysical Research Letters, in which Harvard researchers "concluded that the nation as a whole is leaking methane in massive quantities."

"Fossil fuels don’t come in good and bad flavors."—Bill McKibben
As Common Dreams reported at the time, the study showed that methane emissions in the U.S. rose more than 30 percent over the 2002–2014 period, and that increase could account for 30–60 percent of the global growth of atmospheric methane seen in the past decade.
READ MORE
http://www.commondreams.org/news/2016/03/23/benign-fossil-fuels-mckibben-says-theres-no-such-thing
Posted by Unknown at 6:14:00 AM