Renewable energy includes such sources as wind, photovoltaic and thermal solar, tidal and wave power, biomass etc. Assessing their probable contributions to the future energy mix is one of the more difficult balancing acts encountered in the construction of the model. The whole renewable energy industry is still in its infancy. At the moment, therefore, it shows little impact but enormous promise. While the global contribution is still minor (at the moment non-hydro renewable technologies supply about 1% of the world's total energy needs) its growth rate is exceptional. Wind power, for example, has experienced annual growth rates of 30% over the last decade, and solar power is doing about as well, though from a lower starting point.

Proponents of renewable energy point to the enormous amount of research being conducted and to the wide range of approaches being explored. They also point out correctly that the incentive is enormous: the development of renewable alternatives is crucial for the sustainability of human civilization. All this awareness, work, and promise give the nascent industry an aura of strength verging on invincibility, which in turn supports a conviction among its promoters that all things are possible.

Of course, the real world is full of unexpected constraints and unwarranted optimism. One such constraint has shown up in the field of biofuels, where a realization of the conflict between food and fuel has recently broken through into public consciousness. One can also see excessive public optimism at work in the same field, where dreams of replacing the world's gasoline with ethanol and biodiesel are now struggling against the limits of low net energy in biological processes.

The key questions in developing a believable model are, what is the probable growth rate of renewable energy over the next 50 years, and what amount of energy will it ultimately contribute?  I do not subscribe to the pessimistic notion that renewables will make little significant contribution.  However, I think it's equally unrealistic to expect that they will achieve a dominant position in the energy marketplace, due to their late start and their continuing economic disadvantage relative to coal.

In order to project realistic growth rates for renewable energy sources I have used the same mathematical approach as I used for hydro. Data on recent global production of wind, solar photovoltaic and other forms of renewable energy was used as the starting point for the projections. Excel trend lines were fitted to the data and the equations generated in the process were used to extrapolate the growth of each source.  As we saw previously, the closeness of the fits as demonstrated by the R-squared values on the graphs gives a certain  degree of confidence in the projections.

These projections should be treated with a great deal of caution.  Because both the wind and solar power industries are still so new, it is possible that they may exhibit higher growth rates in the future, thus making the following projections too conservative. On the other hand they may run into unexpected constraints that would skew the outcome in a more pessimistic direction. Due to the youth of the industry there is very little historical production data to use in establishing the trends.  This scarcity of data makes statistical projections less trustworthy, as large discontinuities in production from year to year may render the curve fits unreliable.  On the other hand, there is at least some basis for the projections beyond the enthusiasm of the proponents or the gainsaying of their detractors.  The projections should be regarded more as thought experiments - do they seem reasonable given your own assumptions of how the energy world works?  If they seem unreasonable (either too high or too low), what is the evidence that will dispute them?

Data on the global production of wind energy from 1997 to 2005, collected by the World Wind Energy Association and reprinted inthis graphic, was used as the starting point for the projection shown in Figure 8. The closeness of the fit of the calculated curve to the actual production data, as indicated by the R-squared value of .998, gives us a reasonable degree of confidence in the projection.

There are a number of factors that may act on the future development of wind power.  There is no doubt that it is an attractive replacement for coal or gas-fired electricity generation, at least within the limits imposed by the inherent variability of wind power.  If that limitation can be addressed, either through cheaper energy storage techniques to bridge periods of low wind or smart grids that can tolerate larger amounts of variable power, a significant constraint to rapid and extensive wind development may be removed.  The other potential constraint is the ever-present threat of oil and natural gas depletion.  The rising cost of oil and gas may drive the cost of industrial production of all kinds up sharply before wind power has achieved a significant presence.
As in the case of nuclear power there will be pressures to speed up the development of wind power because of global warming and the depletion of oil and gas, as well as restraining forces imposed by economics, technical feasibility and perhaps some public resistance to having turbines in their neighborhood.

All in all, with a projected growth of 2200% from now until 2050 it looks as though wind is the renewable energy source that will make the most difference to the world's energy mix over the next 50 years.

The data for actual solar photovoltaic production were compiled from here, here and here.  This time, a third order polynomial was used to project the historical trend based on data from 1996 to 2006, and once again the fit is good enough to give some confidence that the observed trend is real.  Though the growth of solar power in percentage terms is spectacular (an increase of 12,000% by 2050), given the lower starting point the contribution of solar power in 2050 will amount to only half that of wind.  However, wind and solar technologies are different enough in their application that this amount of solar power should make a dramatic difference in the lives of many around the world. 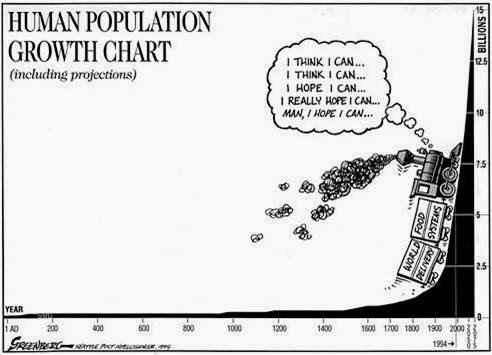 In the category of "other renewables" we have such sources as geothermal, biomass, tidal power etc. Production figures for these sources were obtained from the  Energy Information Agency.  After removing the contribution of wind power from the aggregated figures, the historical production was again projected mathematically. In this case a linear trend line provided the best fit, which seems sensible - biomass is the largest contributor, and it is a very mature energy source, unlikely to exhibit exponential growth in the near future.