The analysis of our oil supply starts from the recognition that it is finite, non-renewable, and subject to effects which will result in a declining production rate in the near future. This situation is popularly known as Peak Oil. The key concept of Peak Oil is that after we have extracted about half the total amount of oil in place the rate of extraction will reach a peak and then begin an irreversible decline.
This peak and decline happens both for individual oil fields and for larger regions like countries, but for different reasons. In individual oil fields the phenomenon is caused by geological factors inherent to the structure of the oil reservoir. At the national or global level it is caused by logistical factors. When we start producing oil from a region, we usually find and develop the biggest, most accessible oil fields first. As they go into decline and we try to replace the lost production, the available new fields tend to be smaller with lower production rates that don't compensate for the decline of the large fields they are replacing.
Oil fields follow a size distribution consisting of a very few large fields and a great many smaller ones. This distribution is illustrated by the fact that 60% of the world's oil supply is extracted from only 1% of the world's active oil fields. As one of these very large fields plays out it can require the development of hundreds of small fields to replace its production.
The theory behind Peak Oil is widely available on the Internet, and some introductory references are given here, here and here.  In addition, the German organization Energy Watch Group provides an exceptionally comprehensive (but still accessible) overview of the topic in the Executive Summary of their recently released study of Peak Oil.

There is much debate over when we should expect global oil production to peak and what the subsequent rate of decline might be. While the rate of decline is still hotly contested, the timing of the peak has become less controversial. Recently a number of very well informed people have declared that the peak has arrived. This brave band includes such people as billionaire investor T. Boone Pickens, energy investment banker Matthew Simmons (author of the book "Twilight in the Desert" that deconstructs the state of the Saudi Arabian oil reserves), retired geologist Ken Deffeyes (a colleague of Peak Oil legend M. King Hubbert) and Dr. Samsam Bakhtiari (a former senior scientist with the National Iranian Oil Company).  This view is also supported by the extremely detailed analysis published by the Energy Watch Group mentioned above.
My position is in agreement with these luminaries: the peak is happening as I write these words (in late 2007). I have confirmed its occurrence to my own satisfaction by examining the pattern of oil production and oil prices over the last three years. I discovered in the process that crude oil production peaked in May 2005 and has shown no growth since then despite a doubling in price and a dramatic surge in exploration activity.

The post-peak decline rate is another question. The best guides we have are the performances of oil fields and countries that are known to be already in decline. Unfortunately, those decline rates vary all over the map. The United States, for instance, has been in decline since 1970 and has lost 40% of its production capacity since then, for a decline rate of about 2% per year. On the other hand, the North Sea basin is showing an annual decline around 10%, and the giant Cantarell field in Mexico is losing production at rates approaching 20% per year.

In order to create a realistic decline model for the world's oil, I have chosen to follow the approach of the Energy Watch Group, which is similar in profile to the projections of Dr. Bakhtiari in his WOCAP model . Both assume a gradually increasing decline rate over time, starting off very gently and ramping up as the years go by. The main difference is that the EWG model is slightly less aggressive than WOCAP. WOCAP predicts that production will fall from its current value of 4000 million tonnes of oil per year (Mtoe/yr) to 2750 Mtoe/yr in 2020, while the EWG projects a decline to 2900 Mtoe/yr by then.  The EWG projects an oil supply of just under 2000 Mtoe in 2030.  My model projects a decline rate increasing from 1% per year in 2010 to a constant rate of 5% per year after 2025, resulting in an average decline rate of 4% per year between now and 2050.  In 2050 oil production is only 18% of what it is today, as shown in Figure 1.


Keep in mind that Peak Oil is primarily a transportation fuel problem.  Almost 70% of the world's oil is used in transportation as gasoline, diesel fuel, jet fuel and bunker fuel for ships.  Right now there is a lot of excitement surrounding the development of electric cars.  However, the immediacy of the peak and the slope of the following decline suggest that it may prove difficult to replace enough of the global automobile fleet in the time available to maintain the ubiquitous personal mobility we have become used to.  Europe and Asia are placing a lot of emphasis on electrifying inter-city rail and urban mass transit.  Rail electrification seems like a sensible initiative that should be pursued urgently by all nations.

The supply situation with natural gas is very similar to that of oil. This similarity makes sense because oil and gas come from the same biological source and tend to be found in similar geological formations. Gas and oil wells are drilled using very similar equipment. The differences between oil and gas have everything to do with the fact that oil is a viscous liquid while natural gas is, well, a gas.

While oil and gas will both exhibit production peaks, the slope of the post-peak decline for gas will be significantly steeper due to its lower viscosity. To help understand why, imagine two identical balloons, one filled with water and the other with air. If you set them down and let go of their necks, the air-filled balloon will empty much faster than the one filled with water. Even though oil and gas reservoirs are made up of porous rock rather than being big pockets of liquid or gas, they behave in much the same way.Because of its viscosity, oil reservoirs often require their internal pressure to be raised over time by pumping in water, in order to force out the oil and maintain their flow rates. In contrast, when a gas reservoir is pierced by the well, the gas flows out rapidly under its own pressure. As the reservoir empties the flow can be kept relatively constant until the gas is gone, when the flow will suddenly stop. 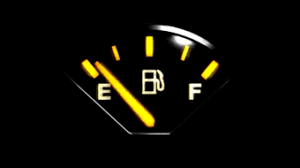 Gas reservoirs show the same size distribution as oil reservoirs. As with oil, we found and drilled the big ones, in the most accessible locations, first. The reservoirs that are coming on-line now are getting progressively smaller, requiring a larger number of wells to be drilled to recover the same volume of gas. For example, the number of gas wells drilled in Canada between 1998 and 2004 went up by 400% (from 4,000 wells in 1998 to 16,000 wells in 2004), while the annual production stayed constant. These considerations mean that the natural gas supply will exhibit a similar bell-shaped curve to what we saw for oil.  In fact, the production of natural gas peaked in the United States in 2001, and in Canada in 2002.  In addition, the remaining large gas and oil deposits are in less and less accessible locations, making the extraction of their reserves slower and more expensive.

One other difference between oil and gas is the nature of their global export markets. Compared to oil, the gas market is quite small due to the difficulty in transporting gases compared to liquids. While oil can be simply pumped into tankers and back out again, natural gas must first be liquefied (which takes substantial energy), transported in special tankers at low temperature and high pressure, then re-gasified at the destination which requires yet more energy. As a result most of the world's natural gas is shipped by pipeline, which pretty well limits gas to national and continental markets. This constraint has an important implication: if a continent's gas supply runs low it is very difficult to supplement it with gas from somewhere else that is still well-supplied.

The peak of world gas production may not occur until 2025, but two things are sure: we will have even less warning than we had for Peak Oil, and the subsequent decline rates may be shockingly high.  I have chosen 2025 as the global peak (20 years after Peak Oil).  The peak is followed by a rapid increase in decline to 10% per year by 2050, for an average decline rate of 6% per year. In 2050 gas production is projected to be only 24% of its current value.  The production curve for natural gas is shown in Figure 4.

One of the big concerns regarding a decrease in global natural gas supplies has to be about its role in the production of ammonia for fertilizer.  Currently 4% of the world's natural gas is used for fertilizer production (the largest uses are as industrial and residential heat sources, and for electricity generation).  As the gas supply declines the price will automatically rise and fertilizer prices will go along for the ride.  Rising fertilizer prices will have dire consequences in a world whose expanding population needs to be fed, where much of the land would not be able to sustain its current production levels without artificial fertilizer, and where the largest population increases will occur in the poorest nations with the least productive soils.


It is possible to produce the hydrogen required to make ammonia (the feedstock for most fertilizer) from other sources - coal and electrolysis are often mentioned.  There are substantial risks associated with those approaches, though.  The cost of hydrogen from alternative sources is still considerably higher than for hydrogen made from methane, pricing any resulting fertilizer out of the reach of those who need it most.  Making hydrogen from coal will also generate greenhouse gases as the carbon is burned for process heat.  Electrolysis depends on having cheap sources of surplus electricity available, electricity that is not being used for higher priorities.  As will become clear below, there is a strong posibility that such surpluses will never materialize, especially if the natural gas currently being used for electricity generation needs to be replaced by other sources.

Oil and natural gas are the world's primary fuel sources, used for both transportation and heat.  Together they supply a full 60% of the energy currently used by humanity.  According to this model, their combined energy peak will come in 2012, at 6679 Mtoe.  By 2050 they will be producing a combined energy of only 1386 Mtoe.  This represents a drop of 80%.  To the extent that we cannot replace this shortfall through novel uses of electricity from other sources, this decline represents an enormous challenge.  It is a challenge that seems destined to alter the fundamental shape of our civilization over the next three or four decades.