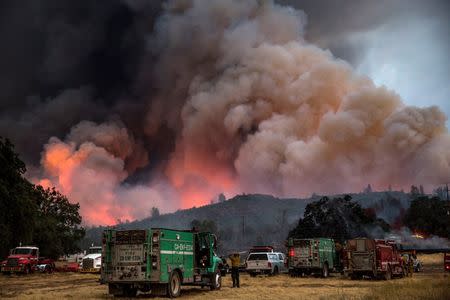 By Curtis Skinner and Victoria Cavaliere

The firefighter, David Ruhl of Rapid City, South Dakota, was on temporary assignment in Northern California, where the brunt of 18 large fires burning across the state have destroyed homes and structures and temporarily displaced hundreds of people, the U.S. Forest Service said.SAN FRANCISCO 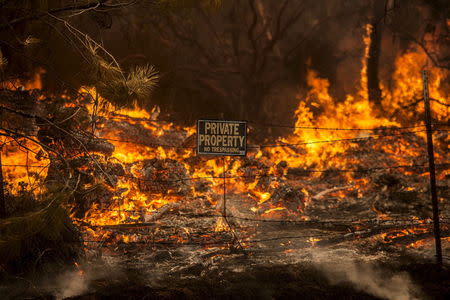 (Reuters) - California's governor declared a state of emergency on Friday as a string of wildfires raged across the state and a firefighter was killed battling a blaze in drought-parched forest, officials said.
Ruhl was battling the so-called "Frog Fire," which broke out on Thursday near the town of Adin in the state's northeast, when he was killed on duty, the Forest Service said.
"This loss of life is tragic and heartbreaking,” Forest Supervisor Amanda McAdams said in a statement.
Experts have predicted a long and volatile summer wildfire season in California, in its fourth year of crippling drought. 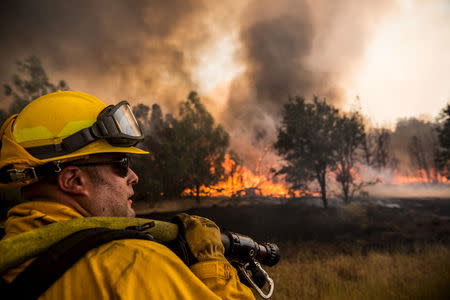 Human domination of the biosphere: Rapid discharge of the earth-space battery foretells the future of humankind

Earth is a chemical battery where, over evolutionary time with a trickle-charge of photosynthesis using solar energy, billions of tons of living biomass were stored in forests and other ecosystems and in vast reserves of fossil fuels. In just the last few hundred years, humans extracted exploitable energy from these living and fossilized biomass fuels to build the modern industrial-technological-informational economy, to grow our population to more than 7 billion, and to transform the biogeochemical cycles and biodiversity of the earth. This rapid discharge of the earth’s store of organic energy fuels the human domination of the biosphere, including conversion of natural habitats to agricultural fields and the resulting loss of native species, emission of carbon dioxide and the resulting climate and sea level change, and use of supplemental nuclear, hydro, wind, and solar energy sources.

The laws of thermodynamics governing the trickle-charge and rapid discharge of the earth’s battery are universal and absolute; the earth is only temporarily poised a quantifiable distance from the thermodynamic equilibrium of outer space. Although this distance from equilibrium is comprised of all energy types, most critical for humans is the store of living biomass. With the rapid depletion of this chemical energy, the earth is shifting back toward the inhospitable equilibrium of outer space with fundamental ramifications for the biosphere and humanity.

Because there is no substitute or replacement energy for living biomass, the remaining distance from equilibrium that will be required to support human life is unknown.

U.S. investors looking to benefit from this trend can play the story a few ways. Certainly U.S. coal companies could see some benefits, but unfortunately those benefits will probably be small. It costs a lot to ship coal, and it’s not clear the U.S. has a sustainable advantage in producing coal for Asian use.
Investors could also look to invest in major manufacturers like Emerson which sell equipment to coal-fired power plants. Those revenues are relatively small in comparison to the size of the firms though

The Growing Threat to the Service Industry

It seems that every day brings with it another fight against Uber. In numerous instances, lawmakers are legislating against the taxi-replacement company. They’re doing so to protect vocal taxi drivers who are demonstrating violently against Uber because they feel threatened that the app-based service is simply better and more efficient … and because government realizes that it risks losing control over parts of public policy.
It shows the economic ignorance of the power base. Politicians are trying to legislate winners instead of allowing the free market to determine the best business model. That never works out well for an economy because it lards the system with unnecessary rules and roadblocks that always have unintended consequences.

The increase, agreed after a request by Tepco, adds to the bill for taxpayers for the disaster in March 2011, when three reactors melted down after an earthquake and tsunami, in the worst nuclear crisis since Chernobyl in 1986, destroying businesses and livelihoods.