This is a very serious warning from NASA. This is probably a good time to consider whether holding on to real estate near coastal waters makes any sense at all. Bloomberg's proposed seawall for NYC makes even better reasons today  to build in light of NASA's concerns. However, it may just be a short-term remedy!There are not too many positives here as for certain it will bring on historic dislocations of all sorts. It may however solve some the wildfire  issues in drought laden coastal areas  around the water, but that is not much consolation!

That’s the higher range of the one to three feet level of rise the UN Intergovernmental Panel on Climate Change (IPCC) gave in its 2013 assessment.
Sea levels have already risen three inches on average since 1992, with some areas experiencing as much as a 9-inch rise.
“Given what we know now about how the ocean expands as it warms and how ice sheets andglaciers are adding water to the seas, it’s pretty certain we are locked into at least three feet of sea level rise and probably more,” said Steve Nerem of the University of Colorado, Boulder and lead of NASA’s interdisciplinary Sea Level Change Team. “But we don’t know whether it will happen within a century or somewhat longer.”

Wind & Solar Are Already A Better Value Than Fossil Fuels

Hawking: There may be a way out of black holes

British scientist proposes that physical information could survive and pass through black holes to alternate universes.

Victoria’s electricity networks are making a major push into the commercial solar market as part of a broad strategy into new technologies that could put them in direct competition with electricity retailers.
The PowerCor and CitiPower networks which service Melbourne and much of regional Victoria, are also pursuing battery storage options – both at the customer and the grid level – and setting up a consultancy company as part of a strategy to deal with rapidly changing economics of solar and storage and a decentralised energy system.


Kissinger: ‘Breaking Russia Has Become
Objective For US’

Former US Secretary of State Henry Kissinger has hit out at American and European Ukraine policy, saying it ignores Russia’s relationship with its neighbor, and has called for cooperation between the White House and the Kremlin on the issue.

“Breaking Russia has become an objective [for US officials] the long-range purpose should be to integrate it,” the 92-year-old told The National Interest in a lengthy interview for the policy magazine’s anniversary that touched on most of the world’s most pertinent international issues. “If we treat Russia seriously as a great power, we need at an early stage to determine whether their concerns can be reconciled with our necessities.”

The diplomat, who is most famous for serving in the Nixon administration, and controversially being awarded the 1973 Nobel Peace Prize, for negotiating the Vietnam ceasefire, accused the West of failing to recognize the historical context in which the fallout occurred between Moscow and Kiev.

“The relationship between Ukraine and Russia will always have a special character in the Russian mind. It can never be limited to a relationship of two traditional sovereign states, not from the Russian point of view, maybe not even from Ukraine’s. So, what happens in Ukraine cannot be put into a simple formula of applying principles that worked in Western Europe.” 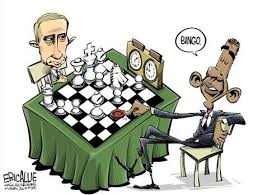