The Netherlands and Belgium have recorded their highest ever temperatures as the second extreme heatwave in consecutive months to be linked by scientists to the climate emergency advances across the continent.
The Dutch meteorological service, KNMI, said the temperature reached 39.1C(102F) at Gilze-Rijen airbase near the southern city of Tilburg on Wednesday afternoon, exceeding the previous high of 38.6C set in August 1944.
In Belgium, the temperature in Kleine-Brogel hit 38.9C, fractionally higher than the previous record of 38.8C set in June 1947. Forecasters said temperatures could climb further on Wednesday and again on Thursday. 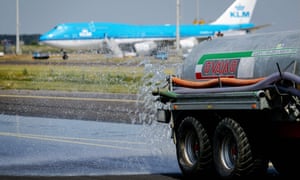 “The most extreme heat will build from central and northern France into Belgium, the Netherlands and far-western Germany into Thursday,” said Eric Leister of the forecasting group AccuWeather, with new all-time highs also possible in Germany and Luxembourg.
Read More