Earthlings: "Our Planet's Poles Are Shifting"

Climate Change May Be Causing Earth's Poles To Shift

Scientists solve mystery of why the planet's axis is tilting eastward.

The position of Earth's axis has dramatically shifted, likely because of melting ice sheets (fueled by climate change) and natural changes in water storage on land, according to a new study in the journal Science Advances.
Erik Ivins, senior research scientist at NASA's Jet Propulsion Laboratory and co-author of the study published on Friday, told The Huffington Post that the movement of water on Earth's surface affects the planet's distribution of mass -- and its axis -- much like adding weight to a spinning top.
"If you considered a spinning top, and then placed a piece of chewing gum on the top, it would start spinning around a new axis," Ivins said in an email. "On the Earth, since water can be transported in and out of the oceans to the land -- affecting global mean sea-levels -- this also changes the moments of inertia, in exact analogy to the piece of chewing gum on a spinning top."
Read More

Neoliberalism – the ideology at the root of our problems

Financial meltdown, environmental disaster and even the rise of Donald Trump – neoliberalism has played its part in them all. It has played a major role in a remarkable variety of crises: the financial meltdown of 2007‑8, the offshoring of wealth and power, of which the Panama Papers offer us merely a glimpse, the slow collapse of public health and education, resurgent child poverty, the epidemic of loneliness, the collapse of ecosystems, the rise of Donald Trump. But we respond to these crises as if they emerge in isolation, apparently unaware that they have all been catalysed by the same coherent philosophy; a philosophy that has no name. What greater power can there be than to operate namelessly?
Why has the left failed to come up with an alternative?
http://www.theguardian.com/books/2016/apr/15/neoliberalism-ideology-problem-george-monbiot

The Demoralized Mind
Western consumer culture is creating a psycho-spiritual crisis that leaves us disoriented and bereft of purpose. How can we treat our sick culture and make ourselves well?
http://www.informationclearinghouse.info/article44653.htm

Climate crisis 'might just be the catalyst we need to knit together the great many powerful movements bound together by the inherent worth and value of all people.'
http://www.commondreams.org/news/2016/05/11/naomi-klein-radical-solutions-only-proper-response-unyielding-science-based-deadline

Civil Disobedience is the Only Way Left to Fight Climate Change

Across the world, thousands of protesters are taking on the planet’s biggest fossil fuel companies. We should support them, and if we can, we should join them
http://www.commondreams.org/views/2016/05/13/civil-disobedience-only-way-left-fight-climate-change


We're in the Eye of a Global Financial Hurricane 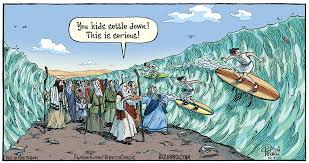 The only "growth" we're experiencing are the financial cancers of systemic risk and financialization's soaring wealth/income inequality.
The Keynesian gods have failed, and as a result we're in the eye of a global financial hurricane.
The Keynesian god of borrowing from the future to fund today's consumption has failed.
The Keynesian god of monetary stimulus / financialization has failed.
Every major central bank and state worships these Keynesian idols:
1. Growth. (Never mind the cost or what kind of growth--all growth is good, even the financial equivalent of aggressive cancer).
2. Borrowing from the future to fund today's keg party, worthless college diploma, particle board bookcase, stock buy-back, etc. (oops, I mean "investment")--a.k.a.deficit spending which is a polite way of saying this unsavory truth: stealing from our children and grandchildren to fund our lifestyles today.
3. Monetary stimulus / financialization. If private investment sags (because there are few attractive investments at today's nosebleed valuations and few attractive investments in a global economy burdened with massive over-production and over-capacity), drop interest rates to zero (or below zero) to "stimulate" new borrowing... for whatever: global carry trades, bat guano derivatives, etc.
oftwominds
Posted by Unknown at 7:00:00 AM