This Friday, it will officially have been 5 years since the Tōhoku earthquake and tsunami disabled Tepco’s nuclear power plant in Fukushima. But despite the passing of 5 years, we still don’t really know much damage this disaster really caused. We don’t know what the long-term effects will be on the environment, or on the people of Japan, and both Tepco and the Japanese government have lied to the world about the gravity of the situation.

And the situation is still much more serious than they’ve been letting on. We know that plant is still leaking radiation, we know the ocean and the area surrounding Fukushima is still radioactive, and we know that the nuclear power plant is a flimsy house of cards that could crumble at any moment.

"In the euro area, the countries in the periphery have nothing at all to offset austerity. They are simply being asked to cut total spending without any form of demand to compensate. I never imagined that we would ever again in an industrialised country have a depression deeper than the US experienced in the 1930s and that's what's happened in Greece."
http://www.telegraph.co.uk/business/2016/03/01/europes-depression-is-deliberate-eu-choice-says-former-bank-of-e/

To eliminate the use of coal-fired power by 2035 and to double the amount of renewable energy in the state by 2040.
http://www.theguardian.com/environment/2016/mar/03/oregon-coal-climate-law-kate-brown

Chronic stress refers to prolonged, repeated exposure to stressful situations, such as caring for a sick relative for a long period of time.


Russia May be Running Out of Oil 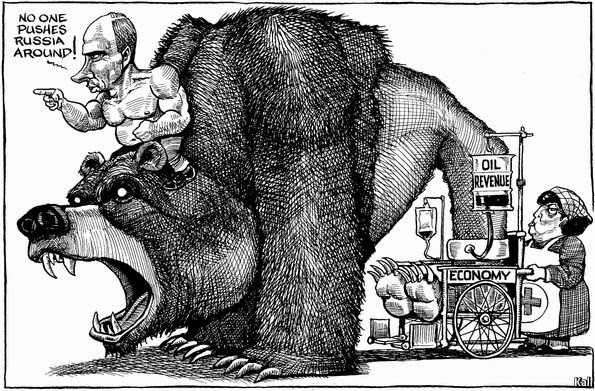 Oil production in Russia will inevitably decline by 2035 according to an Energy Ministry report seen by the Vedomosti business daily. The different scenarios predict an output drop from 1.2 percent up to 46 percent two decades from now.

The document, obtained by the newspaper and confirmed by a source in the ministry, says by 2035 existing oil fields will be able to provide Russia with less than half of today’s production of about 10.1 million barrels per day.
The shortfall should be met by increased production from proven reserves, according to projections by the Energy Ministry.