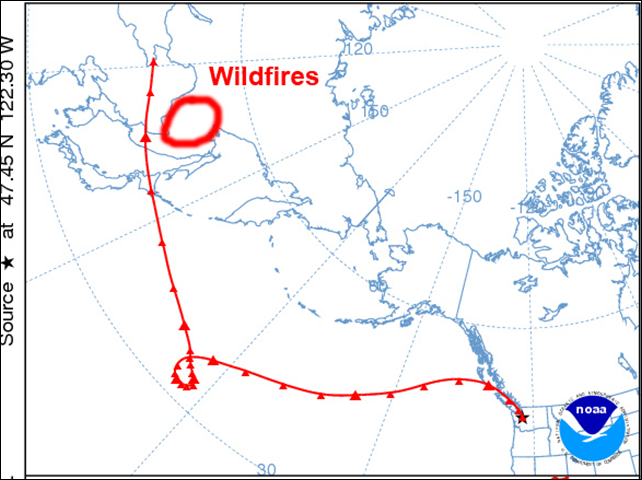 The scenes have almost felt like they're out of Hollywood imagination -- brilliant red sunrises and sunsets the last couple of days around Western Washington. Why so red? It's a byproduct of the massive wildfires that recently burned a large area in Siberia. The atmospheric winds are aligned this week to carry the smoke across the Pacific Ocean and into the Pacific Northwest. First up, to get an idea of just how much smoke is in the atmosphere, look at this visible satellite image taken on April 14 of the southeastern Siberia area where the wildfires got out of control: Read More

"The GATES of Hell "


Anybody remember the last line in that book by Milton, Paradise Lost? I think it had something to do with heaven and hell in our minds. Oh well...

Why This New Study On Arctic Permafrost Is So Scary Scientists might have to change their projected timelines for when Greenland’s permafrost will completely melt due to man-made climate change, now that new research from Denmark has shown it could be thawing faster than expected.
Published Monday in the journal Nature Climate Change, the researchshows that tiny microbes trapped in Greenland’s permafrost are becoming active as the climate warms and the permafrost begins to thaw. As those microbes become active, they are feeding on previously-frozen organic matter, producing heat, and threatening to thaw the permafrost even further. Read More

Melting Faster Than A Snowball In Hell

Think of it this way, as the ice melts so does the air conditioning capacity of the planet. There is a point of no return when this process can not be reversed making the fate of all matters assured. Metrics on ice can therefore provide  a fairly accurate measure of life capacity and can be modelled to determine timelines. Timelines remember that will articulate exponential speed near the end. No further words required.

California Water #Crisis May Be Impossible To Fix 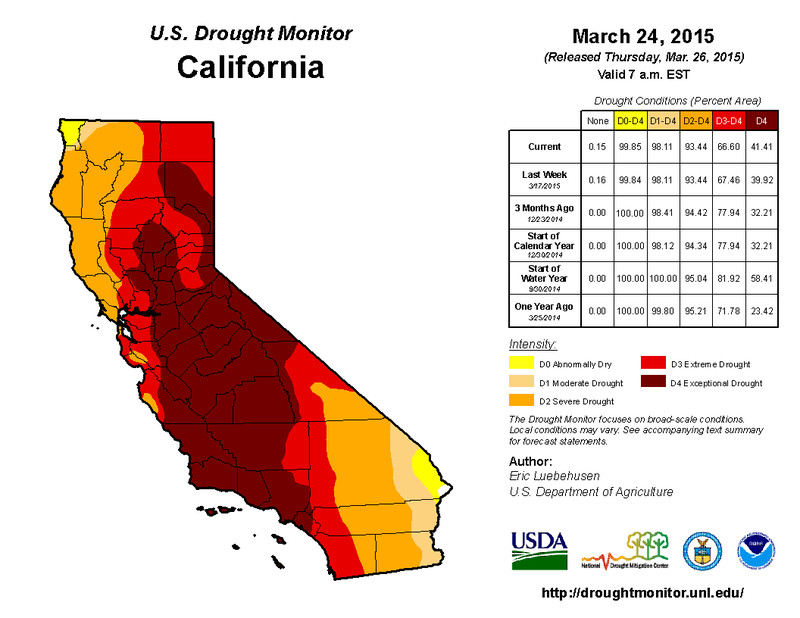 California saw this drought coming. Even if people in the state didn't know it would be this bad — now the worst in recorded history — they've known that dry years are inevitable and had all sorts of ideas for how to deal with them.
But for all that planning, California's current drought has been a disaster. Reservoirs are drying up. Crops are wilting in the fields. For the first time ever, towns and cities will face a mandatory 25 percent cut in their water use.
The problem isn't that no one foresaw the drought. The problem is that no one has been able to solve an underlying issue that is simultaneously less scary and also much harder than a dry spell: California's convoluted water system and intractable water politics. Read More

California is fast becoming the stage for one of the biggest climate related disasters; begging the obvious question - who in their right minds would be thinking about growing the state further in any economic  or physical way. The by-product consequences will also drive food costs everywhere to unprecedented heights.Is this what happens when you put bone-head celebrities in key leadership positions? For sure, this  is not the only reason for the years of short -sightedness.

Pacific coast sardines are facing a population collapse so severe that Oregon's multimillion-dollar sardine industry almost certainly will be shut down this summer.

Anticipating fishermen will pursue anchovies instead, ocean conservationists are pushing for pre-emptive measures to avoid repeating the collapse with another species.

The Pacific Fishery Management Council, which regulates the fishing industry off the coast of Oregon, California and Washington, is expected to vote Sunday to close the West Coast sardine fishery in response to new population estimates that indicate the species' still hasn't emerged from an eight-year plummet. The Oregonian - Read More.

TOP SECRET #ECB CHART - No Bees = No FOOD in Europe? 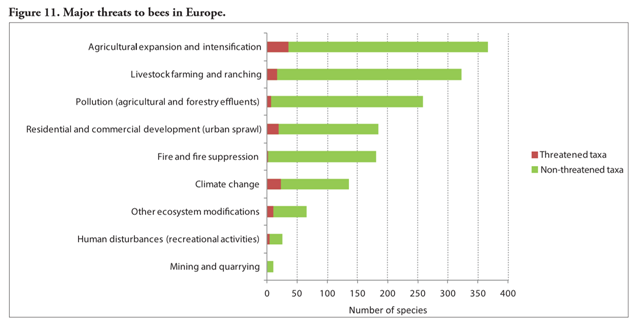 The first-ever assessment of all European wild bee species shows that 9.2% are threatened with extinction, while 5.2% are considered likely to be threatened in the near future. A total of 56.7% of the species are classified as Data Deficient, as lack of experts, data and funding has made it impossible to evaluate their extinction risk.
The assessment was published today as part of The IUCN European Red List of Bees and the Status and Trends of European Pollinators (STEP) project, both funded by the European Commission. It provides – for the first time – information on all 1,965 wild bee species in Europe, including their status, distribution, population trends and threats. Read More.


CAN WE SERVIVE WITHOUT BEES

SACRAMENTO, Calif. — In an aggressive push to reduce water usage statewide, California regulators are proposing that the biggest urban water users cut consumption by as much as 35 percent over the next year.
The State Water Resources Control Board's plan, unveiled Tuesday, would place the heaviest conservation burden on cities and towns with the highest rates of per-capita water consumption, which would include small rural communities as well as affluent enclaves like Newport Beach and Beverly Hills.
Cities that have the lowest per-capita water use — including East Los Angeles, Santa Cruz and Seal Beach — would be required to cut just 10 percent.
Agencies that don't comply with the rules could face fines of up to $10,000 a day. Read More.
Golf Courses Under Pressure

The Dead Sea is disappearing at an alarming rate, leaving behind thousands of sinkholes that are chipping away at the coastline's vibrant and touristy atmosphere.
The Dead Sea - which is actually a lake - is known for being almost 10 times as salty as the ocean and for having the lowest elevation on Earth. However, over the last few decades, the shoreline has become known for sinkholes that appear to just pop up out of nowhere. 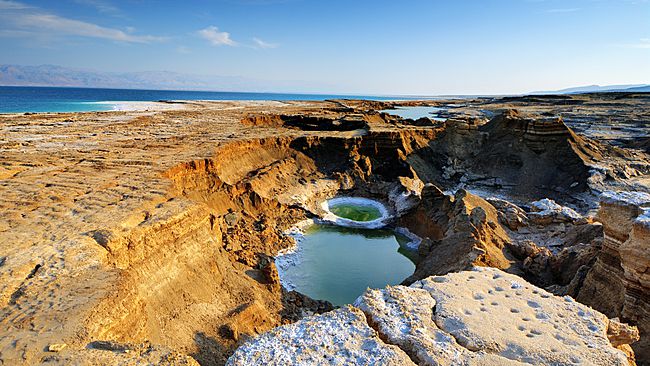 More than 3,000 sinkholes exist along the banks of the Dead Sea, ABC News reported. And some of these craters dive 80 feet into the ground - the equivalent of about an eight-story building. Read More.

Dead Sea Is Drying Up

Sadly, this is only the beginning

What's happening in California right now is shattering modern temperature measurements—as well as tree-ring records that stretch back more than 1,000 years. It's no longer just a record-hot month or a record-hot year that California faces. It's a stack of broken records leading to the worst drought that's ever beset the Golden State.  Read More

WASHINGTON | BY WILL DUNHAM 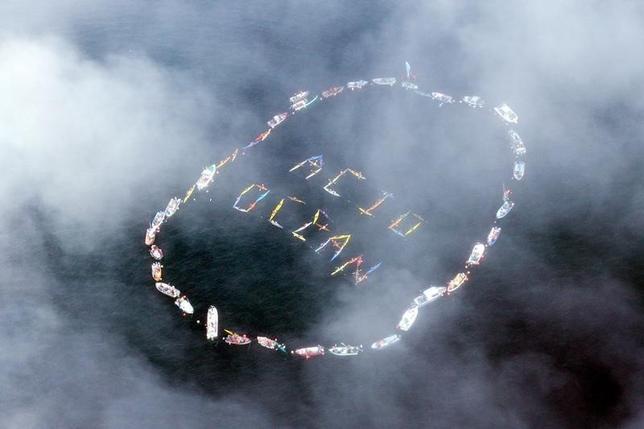 (Reuters) - It is one of science's enduring mysteries: what caused the worst mass extinction in Earth's history. And, no, it is not the one that wiped out the dinosaurs.
Scientists said on Thursday that huge amounts of carbon dioxide spewed from colossal volcanic eruptions in Siberia may have turned the world's oceans dangerously acidic 252 million years ago, helping to drive a global environmental calamity that killed most land and sea creatures.

The researchers studied rocks in the United Arab Emirates that were on the seafloor at the time and contained a detailed record of the changing ocean conditions at the end of the Permian Period. Read More.

are in situation of collapse, says

BRASILIA — in yet another Government meeting to evaluate the water crisis in part of the country, the diagnosis is that, in the Northeast, there are currently 56 cities in State of collapse, i.e. for more than four days without water.


Will IT Happen Here?

According to the Government, there is an ongoing kite cars operation being managed by State and local governments. In the Southeast, despite the March rains, the water regime was lower than expected and the reservoirs of Rio de Janeiro and Sao Paulo are still operating below the average. Read More

Dolphin's Death Leaves Only Five of Her Kind 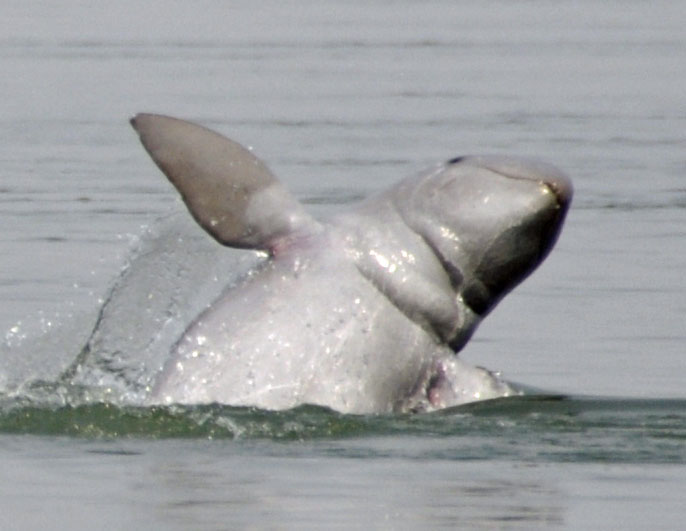 The recent death of one of the remaining six Irrawaddy river dolphins in the Mekong River in Laos highlights the desperate situation for the already critically endangered animal.
Not the Only One, Too

Villagers in Cambodia discovered the female dolphin carcass on April 1, according to news reports in Phnom Penh. She was thought to have been one of the oldest and largest dolphins in the region — a trans-boundary river pool, called the Wang Paa Khaa, which straddles Laos and Cambodia; there are an estimated 85 dolphins remaining in all of the Mekong River, says WWF, of which Cambodia is home to the vast majority. Read More.
At Times There Are NO Words For Loss

Everyone You Know Going NUTS? Here's' WHY?

Before Civilization Collapses, It Will Go Stark-Raving MAD!

“Whom the gods would destroy, they first make mad.” – by Prometheus, in the Masque of Pandora (1875) by Henry Wadsworth Longfellow

April 2015 – CIVILIZATION – The enormous cognitive dissonance between our growing awareness of our civilization’s accelerating collapse, and the ‘news’ in the media and the subjects of most public discourse, continues to baffle me. Though I suspect it shouldn’t. We are all slow learners, preoccupied with the needs of the moment, with a preference for reassurance over truth. I often find myself, these days, at social and other events, at a loss for words, not saying anything, as a result. It’s as if I speak an utterly different language from the people I meet in my day-to-day life, so what’s the point of saying anything? Perhaps this is Gaia’s way of teaching me patience. I continue to vacillate back and forth all the way from the humanist worldview (F. on the ‘map’ above’) to the near-term extinctionist worldview (L.), depending on what I’m doing and who I’m doing it with, or what I’m reading (Charles Eisenstein seems to best represent worldview F. and Guy McPherson best articulates worldview L., and I greatly admire them both).

I’m happy with company anywhere along that continuum — they both speak my newly-acquired language, though with very different dialects. It’s sad to me that most people find collapse too terrifying to contemplate. I find it liberating. Read More.

Remember Nobody Can Just Fly Over The Cuckoo's Nest???